There’s More to the UK than London! 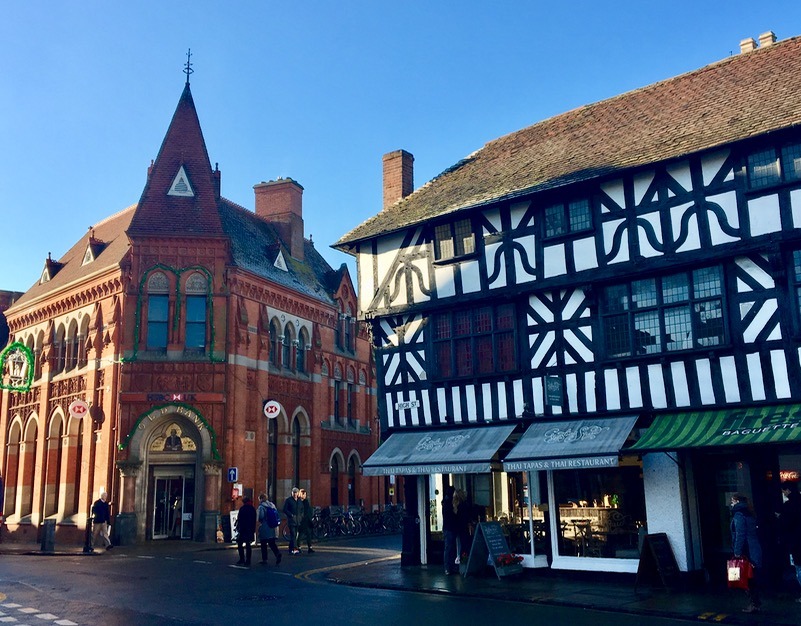 This past Christmas we were planning to visit the UK to spend time with our family then head onto Jordan. Petra is on our bucket list, and after much research, we felt safe traveling there with our family. Alas, it wasn’t meant to be. After a terrorist attack on December 18th, the US Embassy issued a warning alerting US citizens to avoid traveling to Jordan, and we reluctantly made the decision to abort the trip.

So now we had 6 extra days open, with no plans. We looked into various European cities to visit, but with the last minute timing and busy holiday travel, it didn’t make sense for us to leave the UK. So we didn’t. We decided to spend the time driving around areas of the UK that are often overlooked. It was actually quite liberating to have no hotels booked and no itinerary planned. 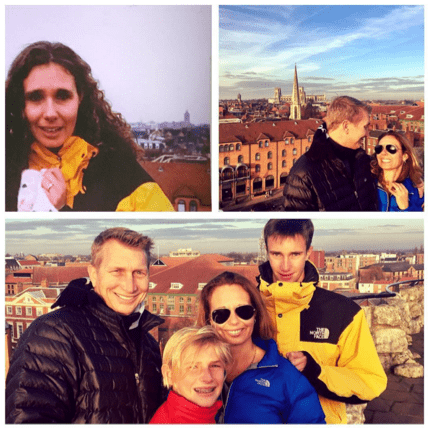 Our first stop was York. Tom proposed to me at the top of York Castle in 1996, so we made the boys indulge us and help re-enact the proposal at the top of the castle… much to their humiliation. We climbed up Clifford’s Tower and made them take pictures. Nothing much had changed in 20 years except for my eyebrows, a couple of kids, and I discovered the Brazilian Blowout hair technique! 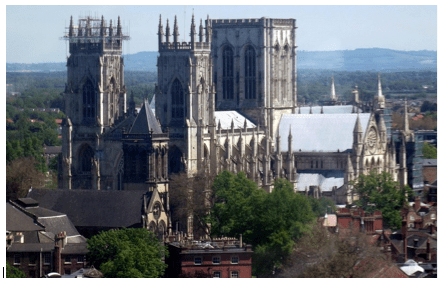 York has an incredible history, and York Minister is one of my favorite cathedrals in the world. It’s a magnificent, gothic building with many different sections all beautifully decorated with lots of stained glass windows.

Our second stop was Stratford-upon-Avon, a medieval market town in England’s West Midlands, famously known as the birthplace of William Shakespeare. The River Avon runs through the town filled with quaint shops and teahouses. We headed to the Royal Shakespeare Theatre to try to buy theatre tickets for that evening. We were in luck, and managed to score 4 tickets to see ‘The Tempest.’ We hurried back to our hotel to freshen up, and hit one of the local pubs for supper.

The pubs are incredible places to eat, especially for families, as they are very reasonably priced, and serve local delights all day such as fish and chips, steak pie and chips, gammon and chips, or a Ploughman’s lunch. Of course pub food is best washed down with a nice Scrumpy Cider or Marston’s Pedigree on tap. After dinner we headed to the theatre, and spent the next three hours lost in an amazing production. It was such a fantastic experience and one we will always remember. 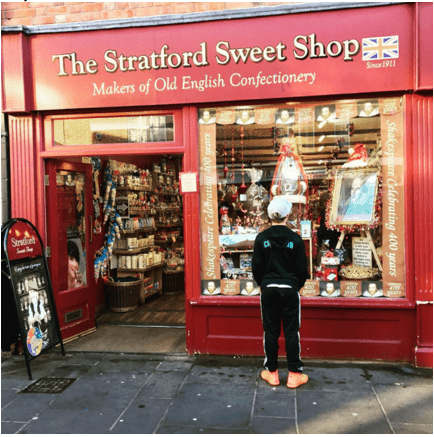 Bath was next on our itinerary. Bath is a town situated in the countryside of southwest England, and is known for its natural hot springs, 18th-century Georgian architecture, and the Roman Baths. 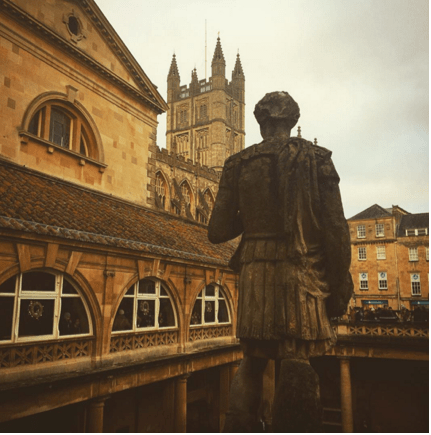 The Roman Baths were constructed around 70 A.D. as a grand bathing and socializing complex. It’s now one of the most preserved Roman remains in the world. Julian wanted to bring his swimmers and take a dip, but alas this is now not allowed. We picked up an audio guide and listened to fascinating commentary as we slowly made our way around the site.  After our tour, we were able to take a sip of the spa water in the Pump Room. This water contains 42 minerals, and is believed to have healing powers… this is a unique opportunity to get a real taste (literally!) of the Roman Baths. 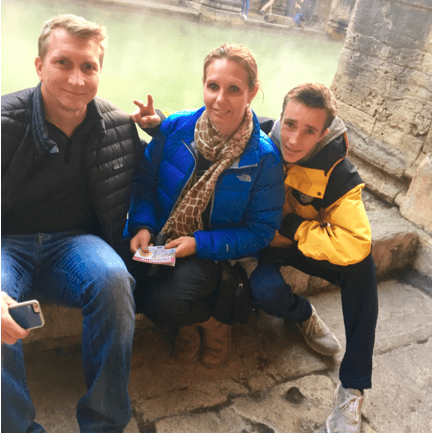 We then hopped in the car and drove to Bristol. Bristol is located in the South West of England, and was once a centre for heavy industry, but over the last few decades, Bristol has reinvented itself as a hub of culture and creativity. Bristol is quite ‘edgy’ and is covered with graffiti; most famously there are pieces of art created by ‘Banksy’ one of the most famous street artists today, who was allegedly born in Bristol. 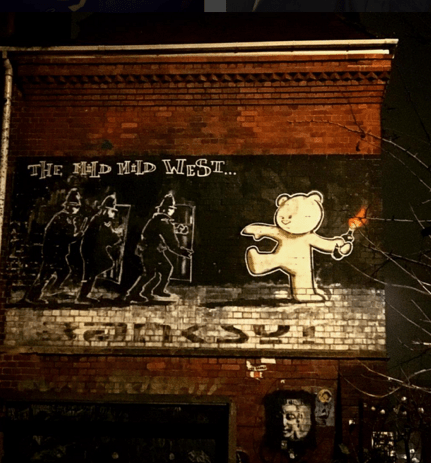 It’s also a hot debate in Bristol whether the graffiti is art or vandalism. What do you think? We walked around checking out street art, and made our way to Gloucester Road, where we ate amazing Jamaican food in the local restaurant Rice and Things.

We woke the next morning to drizzle and wind. We were planning to climb Cheddar Gorge, and since we probably wouldn’t be back in that part of the UK for a while, we decided to put on our raincoats and brave the weather. Best decision ever! 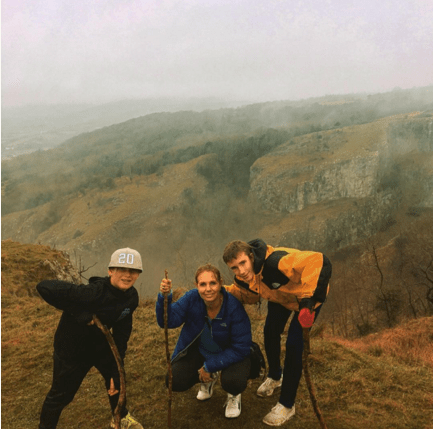 This is the largest gorge in the UK, and the stunning cliffs rise 450ft to the stalactite caves. Our 3-mile hike started with climbing over 300 steps to reach the Lookout Tower.  This is the highest point overlooking Horseshoe Bend and The Pinnacles, and then you descend to Black Rock Gate. We’re all pretty fit, but the slippery mud and rain made the conditions a little treacherous. Regardless, we had a fantastic time, and can only imagine how gorgeous that would be on a warm spring day. We were all tired, hungry, and wet. After our hike in the rain, we stopped at a quaint coffee shop in the Village of Cheddar for, you guessed it, cheddar cheese! 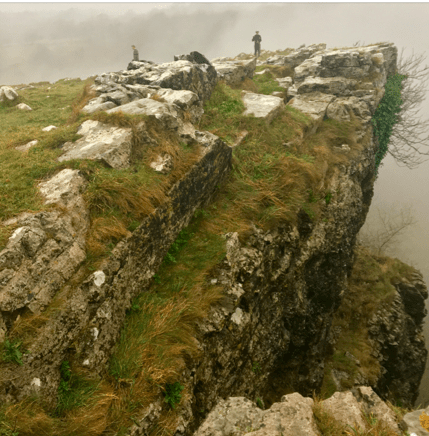 The next day, on our way to Heathrow Airport, we planned a stop at Stonehenge. Stonehenge has many different meanings to people today. It’s a Wonder of the World, a spiritual place, and a source of inspiration. Again it was very cold, drizzling and windy, but we didn’t let that stop us. 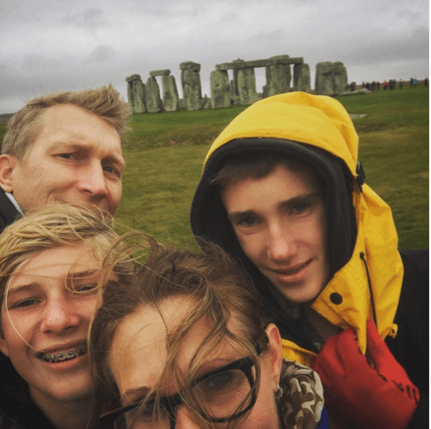 In order to visit Stonehenge, it’s recommended you book your visit online here to reserve a time slot. We were so excited to visit another Wonder of the World, but I’m not going to lie, we all found it a bit underwhelming. (Sorry… just keeping it real). Maybe it was the weather, maybe it was because it was the end of our trip, or maybe we were expecting more. We walked out to the stones, took pictures, and decided to leave pretty quickly. There was a cool exhibition in the visitor’s center, but again we were all ready to hop in the car, drive to our Heathrow Airport hotel, and prepare for the 11-hour journey back to Los Angeles.

Reflecting on the past 6 days over dinner that evening, we were thrilled to visit some of the lesser traveled spots of England. It was fantastic to experience the local culture, countryside, and avoid the fast city pace of London. So would I recommend this to others traveling to England…. Heck yes! It really is a beautiful, charming, scenic area, and chock-full of history.

So since we didn’t get to Jordan this time, we booked to visit Doha, Nepal, Bhutan, and India.

What is your favorite place in the UK outside of London?  Let me know by leaving a comment below and joining me on Instagram and Twitter!