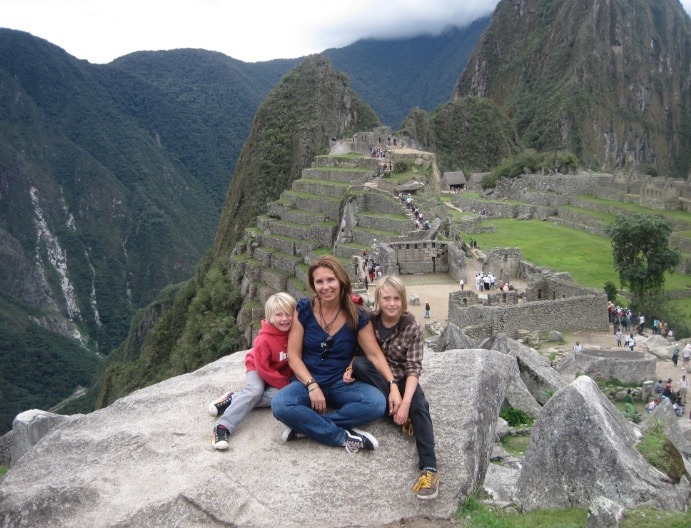 We woke at 5.30am, caught the train and rode the 4hr journey to Aguas Caliente.   The boys were crabby and not super excited to be woken early, but the sun and excitement soon began to kick in – we were traveling to legendary Machu Picchu with our kids! We boarded the Peru Rail Expedition train and found our seats surprisingly decent. The scenery was incredible as we passed small Indian villages, lush green jungle, and we even spotted a group hiking the Inca trail.

Aguas Calientes is a small town in the valley of Machu Picchu 20km from Cusco.  It’s mainly filled with backpackers and budget accommodation, but since we were only there for one night,  we decide to splurge…. and were not disappointed when we arrived at Inkaterra Hotel.

Waiting at the station was a friendly porter from the hotel, who swiftly took our bags and guided us through the loud and colorful marketplace. You can’t help but feel as though you have a large target on your back, as vendors swoop in trying to convince us to buy their stuff. Of course, the boys would stop and pick up every crappy souvenir and enquire “Quanta es?”, then find themselves in a heated negotiation for a wooden llama that they didn’t really want in the first place! However, we finally made it through the other side and boarded our sketchy little bus to take us the final 6km to the ruins.

The bus is scary since you take a 31km winding skinny dirt road up the hill with severe hairpin bends, and vertical sheer drops plunging down into the Vilcanota Valley below were especially comforting (Not!)  It’s especially sketchy when you meet a bus driving the opposite direction and both drivers sort of jockey like two angry bulls for space! The scenery is lush cloud forest with great views of the sacred mountain Putucusi on the opposite side of the valley.   I think even the boys were freaked out, and asked  “Mom, what would happen if we slid off the edge of the cliff?”, and “Are we seriously going to take this road up to the top?” 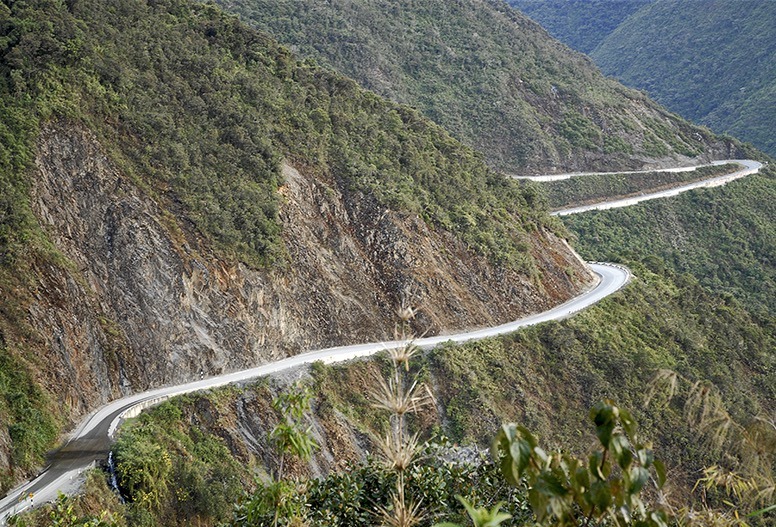 We finally arrived, walked through the entrance, and caught our first glance of Machu Picchu. It was surreal actually seeing this in person, and I think took us all by surprise. There was a path that led through the ruins, and a steep rugged path that allowed you to climb to higher elevation and take a peek at this city. I polled the circus and asked if they were up for a 2-hour hike… “Totally!!!” they all said, and off we went. This route is not for the unfit, vertigo-challenged or faint of heart.  The ‘steps’, were little rocks jutting from the mountain at different angles and heights. We came face to face with live llamas on more than one occasion (it’s weird how those things are able to live at such high altitudes…), we encountered red, sweaty, heavy breathing tourists from all countries and multiple packs of Peruvian school kids who just had to take pictures with the boys. Turns out blonde haired/blue-eyed children are pretty scarce in Peru! 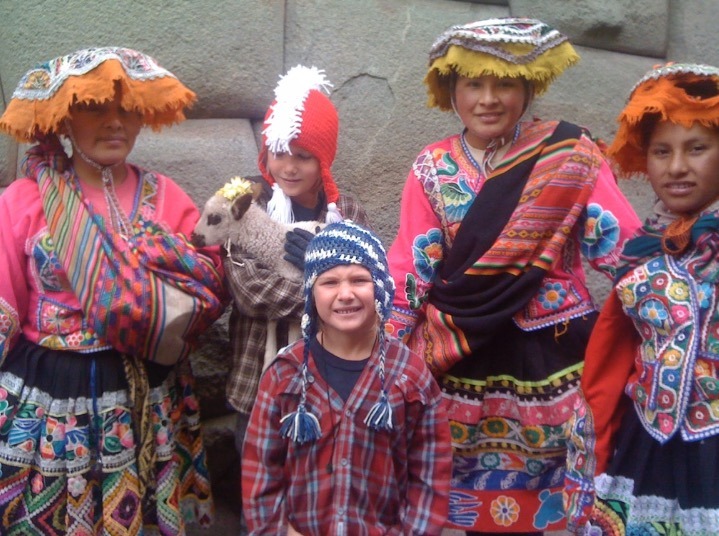 Finally, we reached the summit and sat in awe. I gave my usual cheesy family speech “Listen guys, we will probably never be here again as a family… you may come with friends or your own families, but we must be sure to appreciate and absorb this moment together”…… blah blah…   We all sort of sat in silence for a few minutes and then Julian quite poetically said, “Mom… mom…. can you see all the Llama poo?”…. Sigh, there WAS a lot of llama poo granted, but we were looking at one of the Wonders of the World for heaven’s sake…. I tried Sebastian (who was quickly turning into my favorite child). “What do you think Seabass?”   He was actually taking in the whole view, and seemed to be having his own ‘moment’, and finally said, “This is almost the best day of my whole life”…. When pressed for the best day of his life, he said, “When I met Shawn White and Tony Hawk!”  So there you have it… apparently, Machu Picchu is cool, but not quite as cool as Llama poo or Shawn White!

We spent the day exploring, learning the history and clamoring over the ruins. I was quite surprised we had complete freedom to explore.  This surely must change in the next few years since the rocks will erode, but we could pretty much hang out wherever. The best part about spending the night in Aguas Calientes, is at 2 pm most tours take the 4 pm train back to Cusco, and we pretty much had the whole place to ourselves in the late afternoon.
We watched the sunset, lay back and took in the scenery… or in Julian’s case, chased the llamas trying to make them fart! We finally were exhausted, dusty, and headed to the hotel.

Again, I cannot rave enough about the Inkaterra Hotel, which is located on 12 acres at the edge of the mountains. From the moment we arrived, they took care of every need imaginable. We arrived back just in time for their warm cookies and afternoon tea, then they showed us our fantastic room. The rooms have every amenity you could possibly imagine including, an open fireplace, stone shower, round-the-clock butler service and spa.  “Mom, this is posh, right?” asked the boys, as they jumped on the bed, put on the robes, and began to eat a complimentary fruit and nut basket. Hot Hubby was eyeballing the complimentary bottle of Pisco in our room for after dinner drinks!

We showered and retired to the library for the pisco sour happy hour, and were treated to an incredible five-star meal in their glass-walled restaurant. We watched the wildlife in silence.  Eventually, we retired to our room to find chocolate on the pillows,  lit candles, a roaring fire, and hot water bottles in the bed…. yes… this was posh!

The next day, we were treated to the most decadent breakfast buffet and had just enough time to take the nature walk through the hotel grounds and lush gardens, set in 12 acres of jungle.  We learned about the 372 different species of Orchids, 18 different hummingbirds, and saw some gnarly looking bugs!  This was a huge hit with the boys as they walked with their magnifying glasses, binoculars, and cameras!

Phew… time to head to the station, (where our luggage was waiting with our friendly porter), we boarded the Vistadome train back to Cusco, and tried to lock the sights, sounds, smells, and feelings of this magical place forever in our brains.

I cannot stress how magical this trip was with my “circus”. There will always be the naysayers who think that the children are too young for this type of thing… blah blah… but regardless of your age, traveling to Machu Picchu with kids was awesome – it’s hard not to appreciate farting llamas at one of the Wonders of the World…… right?