Mastectomy: What You Can Expect 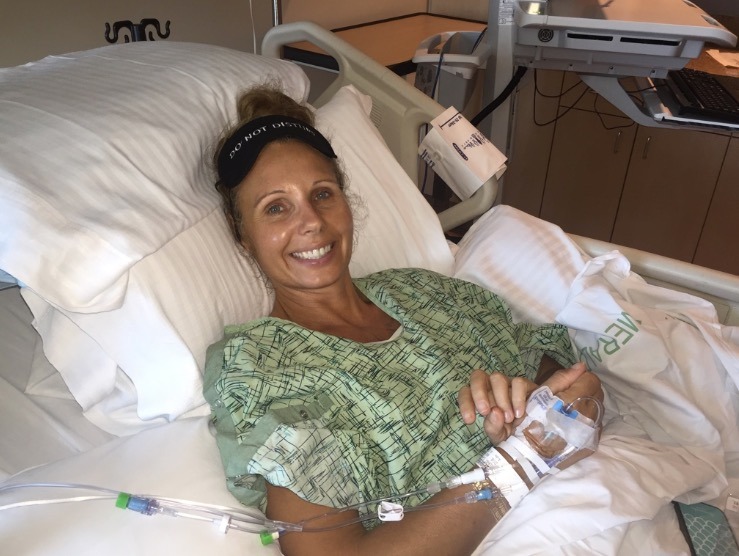 After receiving my breast cancer diagnosis in late March, I quickly scheduled consults with breast and reconstructive surgeons. I needed to remove these vile, growing, tumors, STAT! I wanted multiple opinions, and as I quickly discovered, there wasn’t a ‘one size fits all’ to breast cancer. I’d need a mastectomy to remove the tumors, have them sent to a pathologist who would grade them precisely, then meet with oncologists, to discuss adjuvant therapy. This is treatment given after surgery, to increase chances of long-term disease-free survival.
Hot Hubby and I broke the news to the boys, ages fourteen and ten. (This was literally the hardest day of my life).  They were very scared, tearful, shocked, and had many questions. Their biggest concern was that I’d die. It was truly heartbreaking to see the pain and fear in their little eyes. (F-you cancer!)

I learned my treatment options: lumpectomy, single mastectomy or double mastectomy. Although it was the most aggressive, a double mastectomy seemed the best choice for the following reasons: My tumors covered a large area and the cosmetic outcome of a lumpectomy wouldn’t be ideal, my cancer had a 20% recurrence rate in my right breast, I had two boys who were counting on me being around, and my boobies were trying to kill me so now they were dead to me! This was a very personal decision, not one we made lightly, and once I found my ‘dream-team’ of surgeons, Dr. Kristi Funk (yes she was also the super-surgeon to Angelina Jolie and Sheryl Crow) and Dr. Tiffany Grunwald, I was ready to move quickly.
APRIL 20 – nipple-sparing surgery. This procedure happens one to two weeks prior to mastectomy through the planned incision. The surgeon lifts skin from the breast, removes a small piece of tissue behind the nipple, which is analyzed by a pathologist. This rules out cancer directly behind the nipples, which would make preserving them dangerous. Additionally, it encourages extra blood flow, which reduces the chance of skin loss after the mastectomy. Also my sentinel lymph node was removed and tested. This is the first lymph node where cancer cells are most likely to spread. My nodes looked clear in MRI, but Dr. Funk wanted to be 1000% certain they were clear.

We arrived at the surgery center, Dr. Funk reassured us I’d be fine, and prepped me for surgery. Hot Hubby kissed me, (tearful of course), and then it was showtime. My anesthesiologist gave me a ‘little something’ to feel good, and I started to float around the room. Then…suddenly, I woke up in recovery. It felt like a time-lapse. I wanted that floaty feeling to last forever.
I arrived home and the boys wanted to snuggle. Naturally I let them, despite feeling dreadful. I was sore, had two 6-inch incisions, and felt woozy from the drugs, but we lay there, completely still and cuddled.
APRIL 23 – nipple/sentinel node biopsy results. I’ll start with the good news. I was healing, my nipples were cancer free, and I could keep them during my mastectomy, giving a more cosmetically pleasing result. But, my sentinel lymph node tested positive for cancer. Only a small amount, but this was a huge blow. This meant more lymph nodes would be removed and tested, and my cancer may have spread further than we initially thought.

APRIL 29 – mastectomy day. I walked with a BFF (’cause why wouldn’t you the morning of a major surgery?) I needed to see the ocean, breathe fresh air, and clear my head, before filling it with mad drugs. Hot Hubby drove me to the hospital. It was a beautiful day, we listened to Bob Marley, I closed my eyes, and he held my hand. I felt peaceful… which quite possibly was the drugs kicking in!

We checked into St John’s Medical Center, and Dr. Grunwald arrived to mark me up. She was so precise, wrote measurements to the nearest millimeter, was calm, and we had no problem putting my life in her hands. Hot Hubby kissed me goodbye (tearful of course), and I was wheeled through the corridors. It seemed to take forever to reach the operating room and I was petrified. There was no turning back. It was time for me to lose my breasts. Dream Team surgeons were behind scrubs and masks, anesthesiologist was already putting a ‘little something’ into my IV, and the last thing I remember was them watching me drift into la-la land.
This was a loooong two-part surgery. Dr. Funk would remove both breasts, all the tissue in my chest, and 12 lymph nodes. Dr. Grunwald would then insert ‘expanders’ underneath my chest muscle, slowly stretching my muscle and skin, ultimately reaching my ideal breast size (there were many jokes about my future DD’s!). Hot Hubby sat in the waiting room, anxiously praying for good news. After nine hours, he was taken to my bedside in recovery. I remember bright lights, beeping machines, a flurry of activity. I asked Hot Hubby if I was OK. He cried (naturally), said there were no complications, and that my cancer had been evicted!

I was transferred to my room and lay in excruciating pain. I was nauseous and dazed. Nine hours under general anesthesia was taking a horrible toll; I felt hideous. Hot Hubby arranged a team of BFF’s to manage my care. They charted meds, worked on my respirations to avoid pneumonia, managed my nausea and watched me sleep. I eventually managed to eat, shuffle to the bathroom, as gradually the anesthesia left my body. My nausea slowly subsided, and I felt I might not be trapped in this vortex of vomit and pain forever.

MAY 2 – Discharged from hospital. Before settling into my new ‘command central,’ my boys had cleaned, organized and even picked up their clothes. We were all relieved to have the surgery behind us. It was time to prepare for my recovery and the boys could not have been more attentive. I had four drains, and everyone pitched in to help empty, measure, and log. It was a team effort. The first week was rough. I had intense pain and discomfort. I had medication and boy did I need it. My arms needed to stay by my side to help rebuild and regenerate my blood cells, and for my skin to grow onto my muscle. Any slight movement could jar this process, and cause problems. The boys told me I looked beautiful, but I think they were especially happy when I could finally shower!

MAY 7 – Great news! Finally, at my post-op appointment, I learn my right breast was totally clear and all 12 lymph nodes were clear. Theoretically, I was cancer free. Dream breast surgeon thought a few cancerous cells had traveled to my sentinel lymph node, which did its job, and caught and contained them. Hallelujah!
I still had a long road ahead with appointments, adjuvant therapy, breast expanders, PET/CT scans, physical therapy, and reconstructive surgeries, but I was ready to continue to fight for my life. The outpouring of love and support from our village was incredibly comforting, and as a family, we vowed that fear would not rule us. We would live large every day!
Read what every breast cancer survivor wishes you knew here!