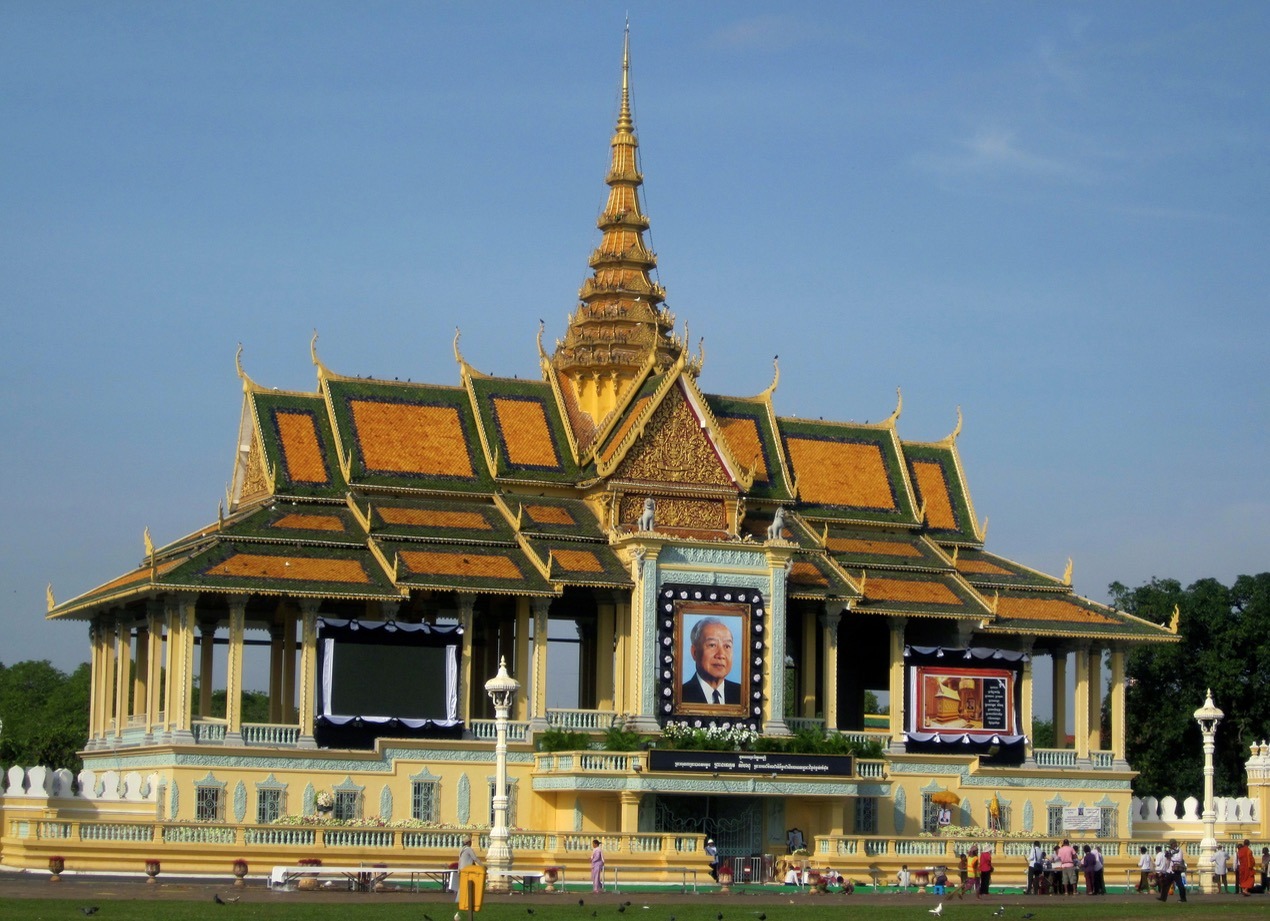 We LOVED LOVED LOVED Cambodia.  We loved the people.  We loved the country.  We loved the Khmer comfort food.  We loved learning there’s so much more to Cambodia than Angkor Wat (we’ll get to that later) and the Khmer Rouge.  Sadly Cambodia’s cultural heritage was pretty much lost under the Khmer Rouge regime, and I cannot even claim to understand how that felt.  However, from the Cambodian people we met along the way, we did get a sense the county seems to be slowly healing and regaining their gorgeous culture that was stolen from them.

Many people visit Cambodia and decide to skip Phnom Penh for the more southern regions of Siem Reap or the beaches.  We were excited to explore Phnom Penh and drive to Siem Reap rather than fly, to explore the country.   We arrived after 24 hours of travel to the most vibrant city filled with the most incredible sights, smells and sounds we had ever imagined.

The beautiful Royal Palace has been the seat and residence of Cambodia’s royal family since the 1860s. The building is an excellent example of classic Khmer architecture and is a vibrant place of activity for Cambodian people who will often sit and pray for days to pay their respects. 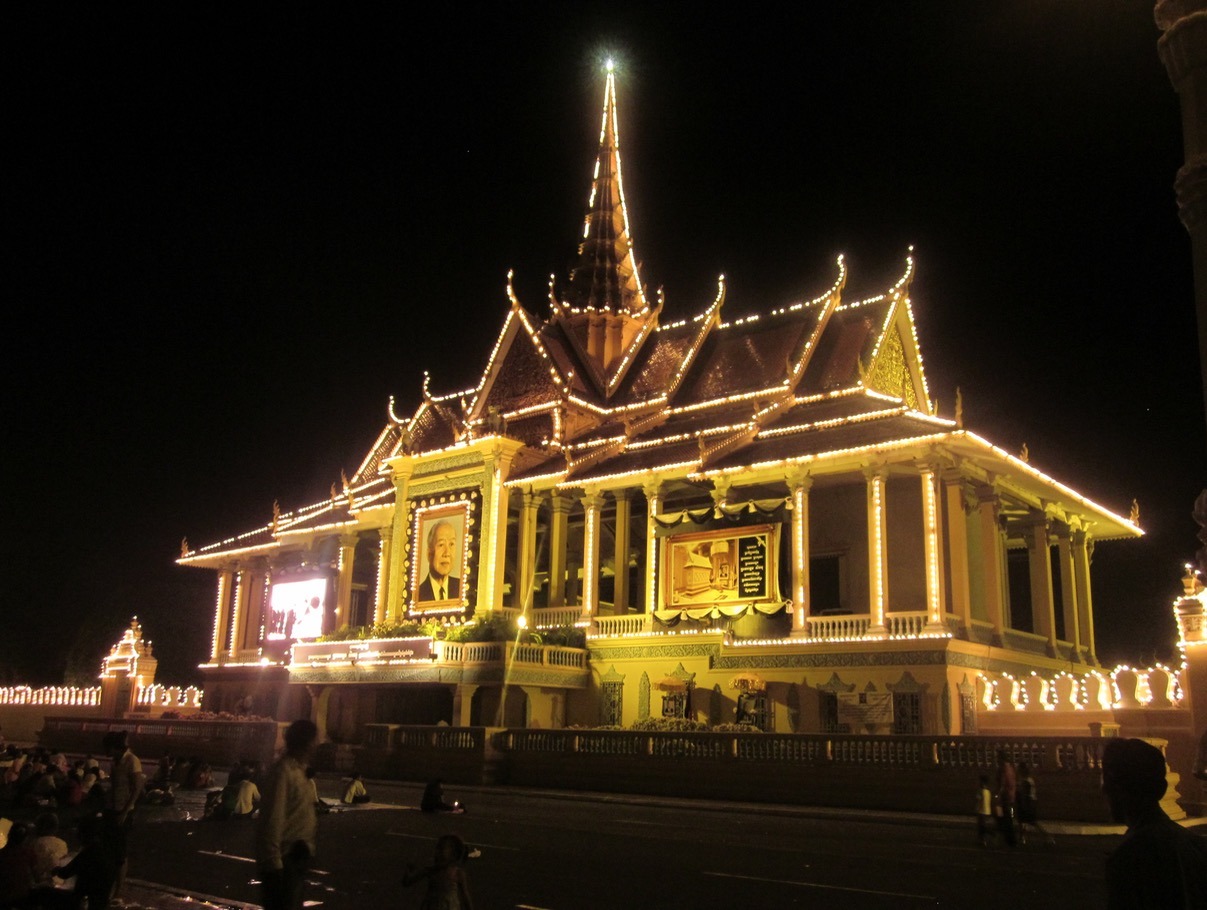 We were there in November 2012 and the former Cambodian King and Prime Minister Norodom Sihanouk had died a few days earlier and the streets were filled with Cambodian’s paying their respects, praying, crying and lighting incense.  His body stayed in the Royal Palace for a period of time to allow Cambodians to gather and share one last farewell to their former leader.

Sample the street food…. or not!

It turns out eating bugs is very common in Phnom Penh (and Cambodia in general).  The boys were in awe when we visited the local market to find baskets full of deep-fried baby chickens, cockroaches, crickets, plump ants, giant tarantulas and many more.

A  popular street food is fertilized duck embryos and the locals particularly love these and we watched a group of kids sitting around just popping them in their mouths one after the other! 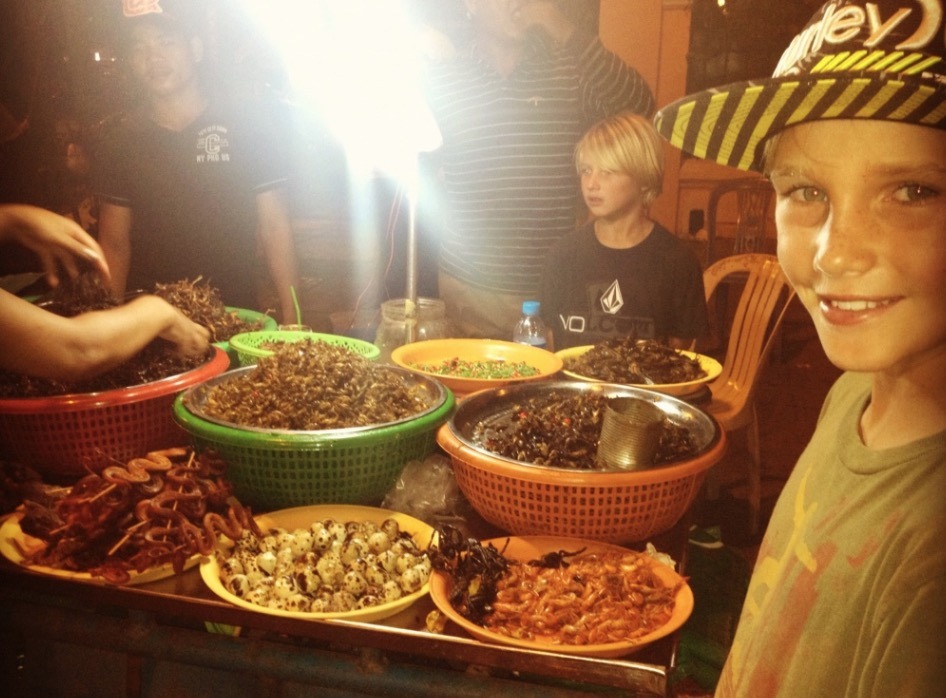 Central Market is a large indoor market filled with a huge assortment of goods, including clothing, jewelry, gems, flowers and souvenirs.  There are also lots of stalls selling local  food items such as seafood, spices and vegetables.

Since this market is indoor, it gave us a nice break from the blazing heat as it is properly ventilated.

Drive 6 hours on Route 6 from Phnom Penh to Siem Reap.

This mostly paved highway (I use the word highway loosely) passes through many rural villages of Cambodia. 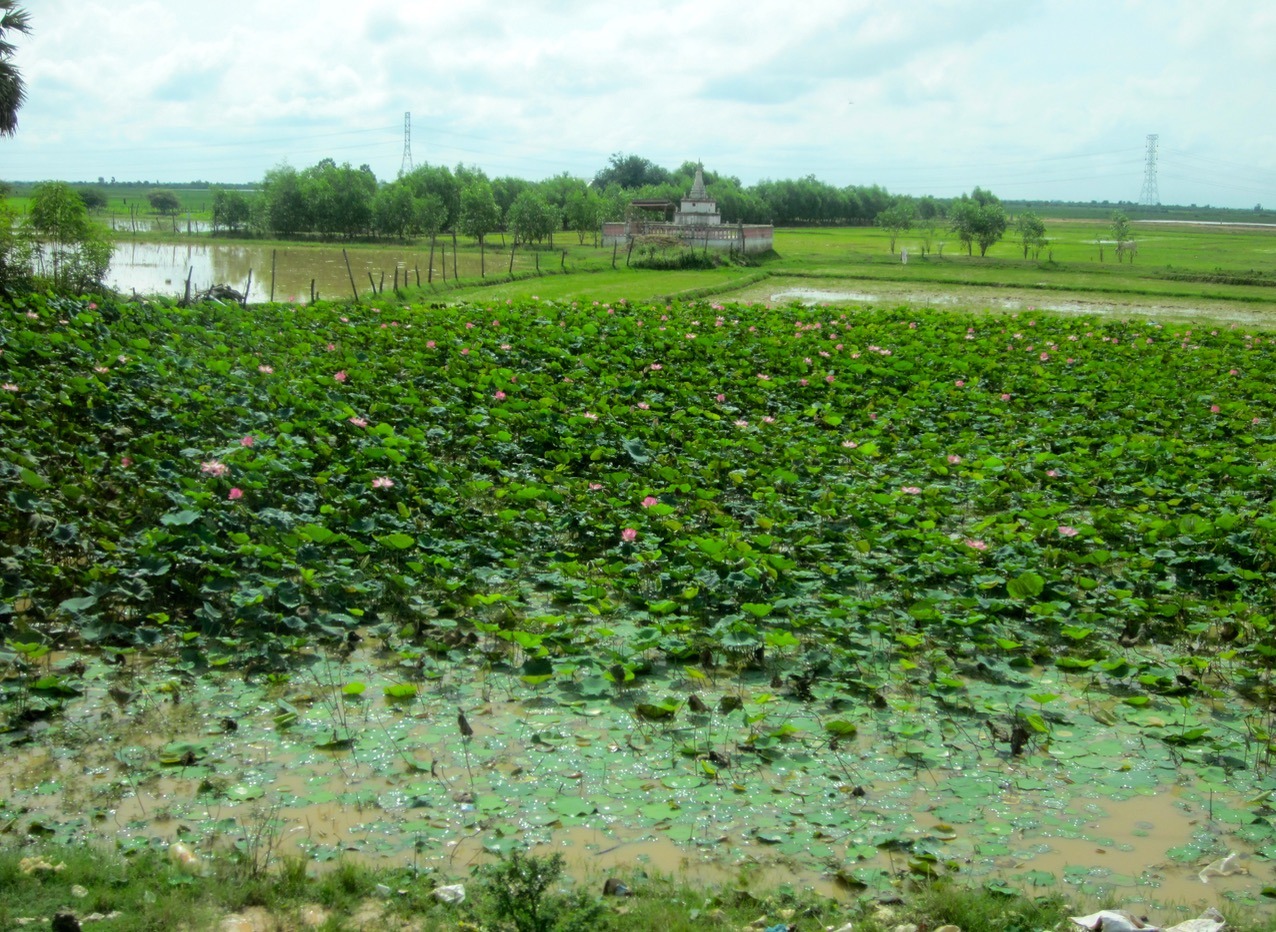 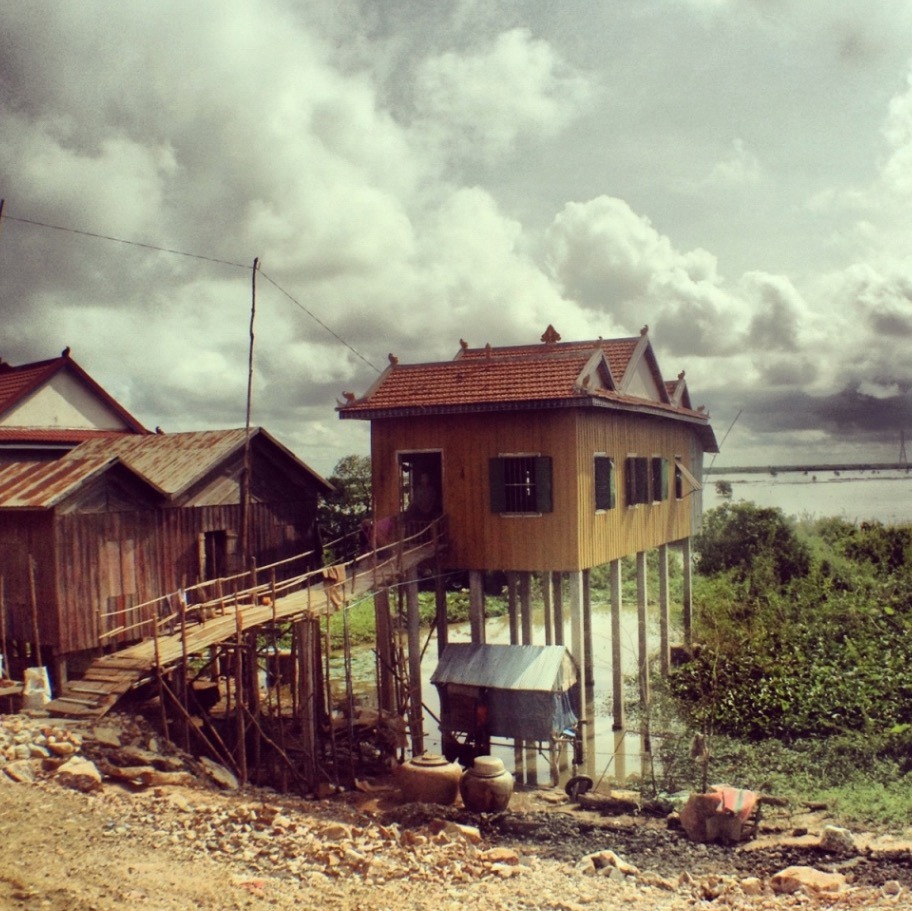 Along the way, we were able to catch a glimpse of daily life and saw many houses on stilts to avoid flooding during the rainy season,  “snack” stands on the side of the road selling deep fried bugs, workers in the rice paddies, and women walking their cow from the market by a leash.

We stopped at Skun Spider Market on our drive to Siem Reap, and it’s a nightmare for anyone who is even slightly scared of spiders. 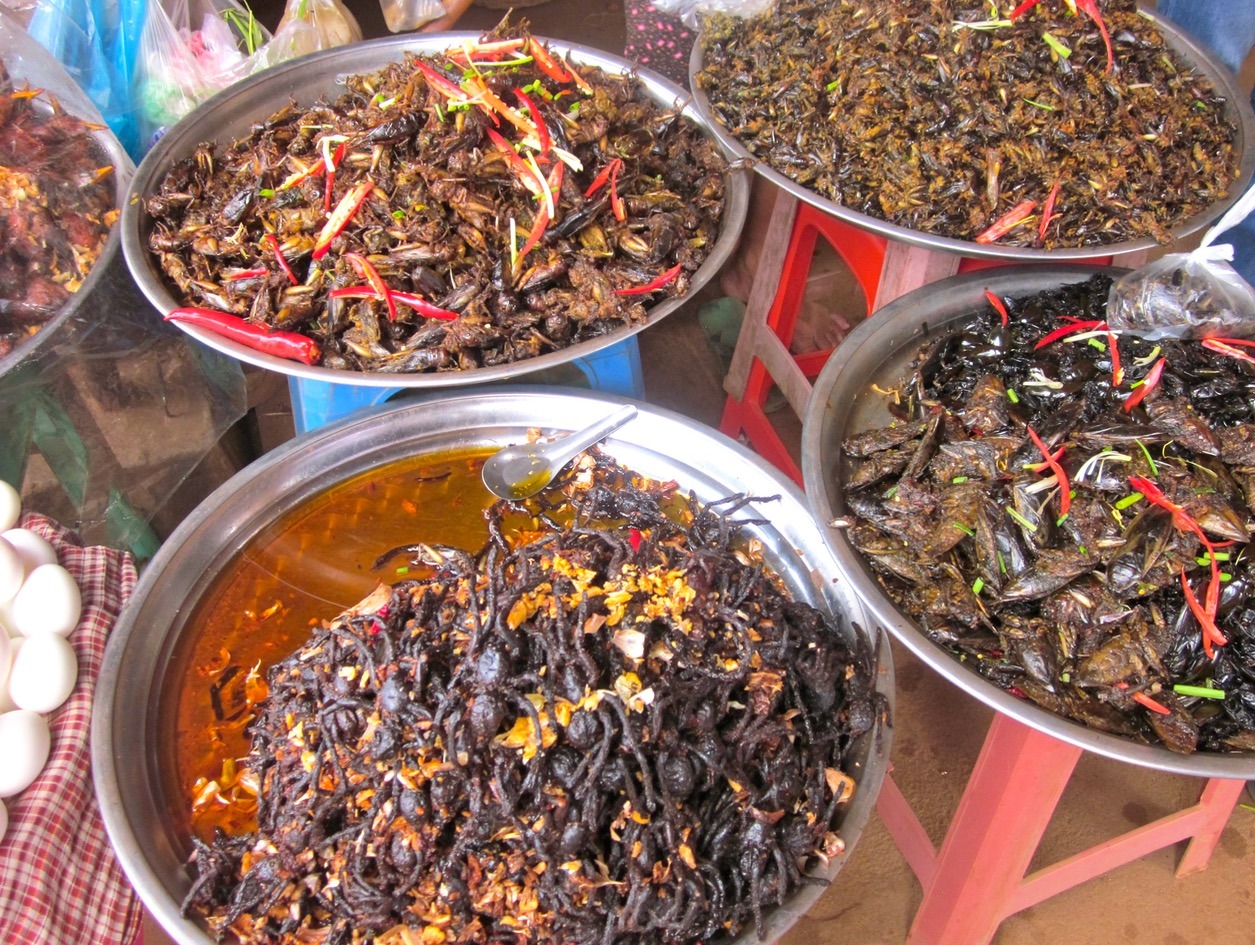 The town is literally crawling with spiders infesting the area for years, and is now a popular spot to stop.

After leaving the bus, we were greeted by a young boy with a handful of tarantulas wanting to put them on the head of my boys.  After politely declining, we entered the market to see the most unbelievable displays of tarantulas cooked using various methods.

The spiders are caught in fields or holes where they are bred, before having their venomous claws removed, then they are deep fried in various herbs and oils.  Yum… delicious right?

Driving along Route 6 from Phnom Penh towards Kampong Thom and Siem Reap, we were excited to spot an ancient bridge being guarded at either end by nagas. 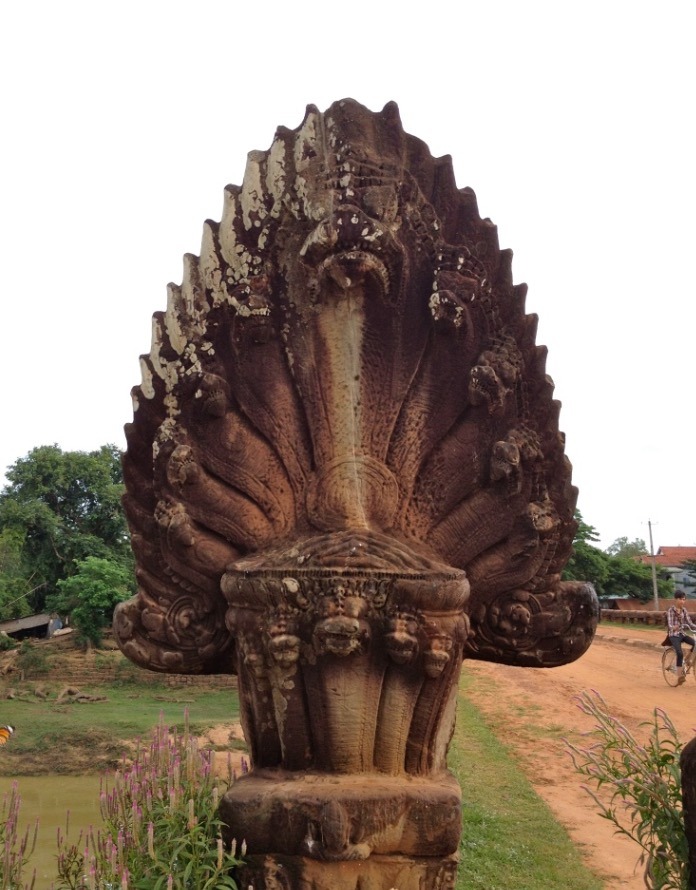 This bridge located about 60km south of Siem Reap, is also known as Spean Thma or the bridge of stone.  It’s one of the few Khmer Empireera bridges to have survived to the modern day. 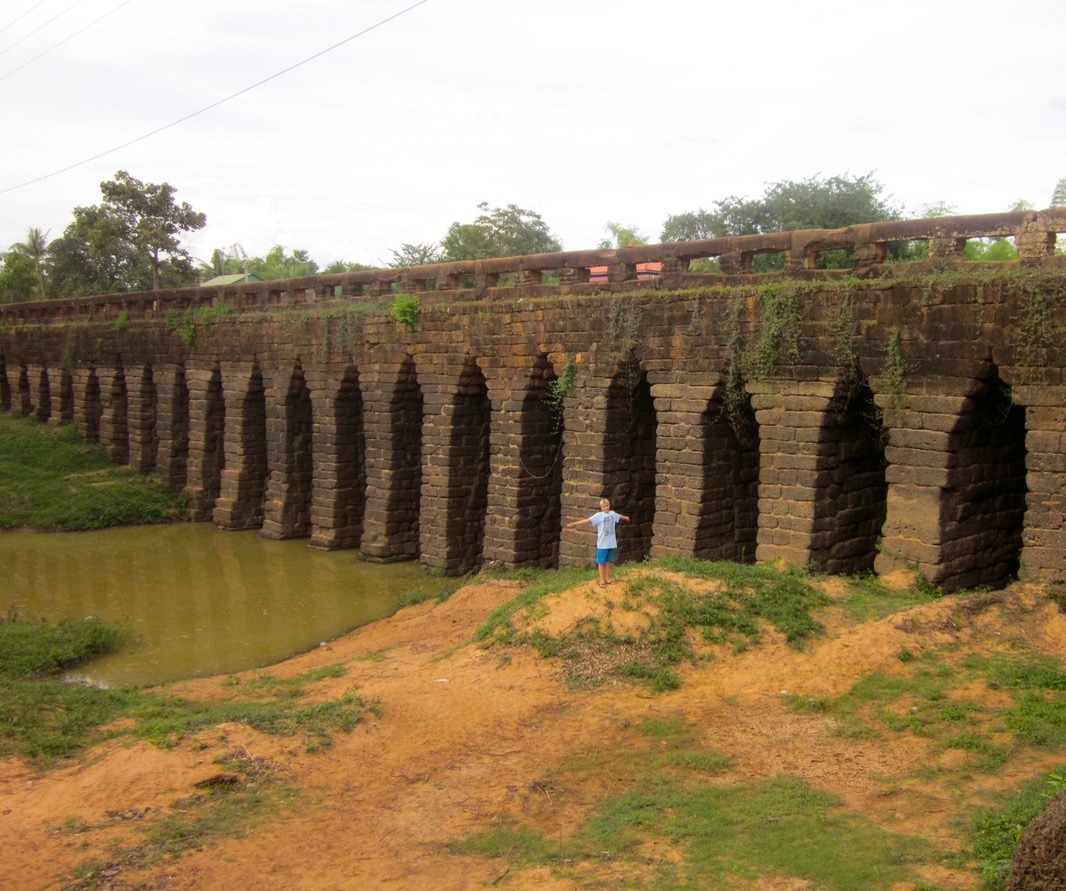 I cannot recommend visiting Cambodia enough.  This beautiful country is filled with warm, kind, generous, hardworking people trying to rebuild their lives the best they can.
Have you driven from Phnom Penh to Siem Reap? What spots did we miss?