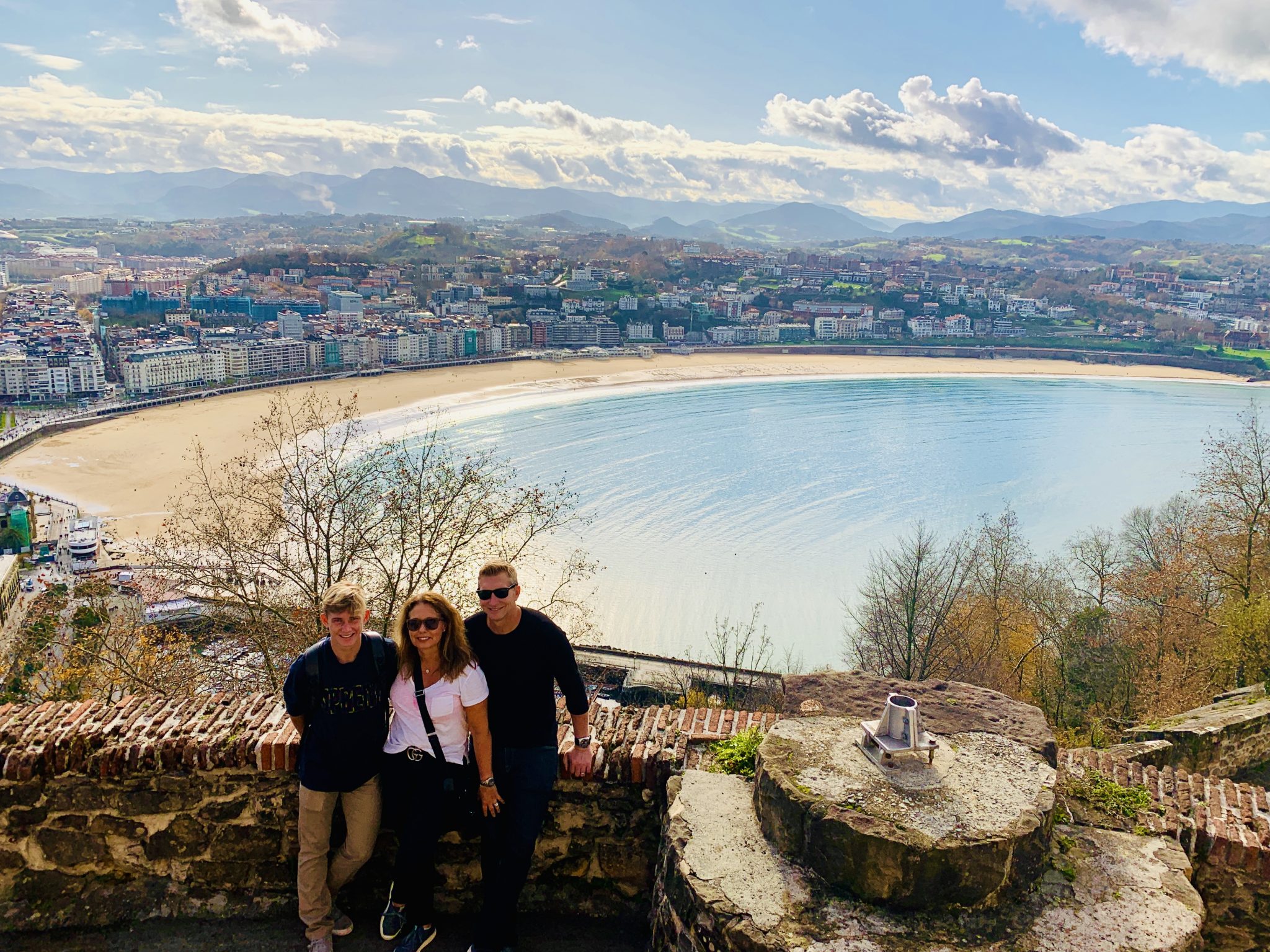 As we drove along the Pyrenees, through Southern France and Northern Spain, we were excited to stay in San Sebastian, Spain.  The number one reason most people visit San Sebastián, in Spain’s Basque region, is to sample the fantastic cuisine. We’d heard and read so much about it, and were dying to see the incredible art, architecture, and of course taste the delicious small plates at pintxos bars. I promise, San Sebastián, Spain, was one of those cities that matched up to ALL of the hype and anticipation.

Here are our favorite things to do in San Sebastian, Spain. 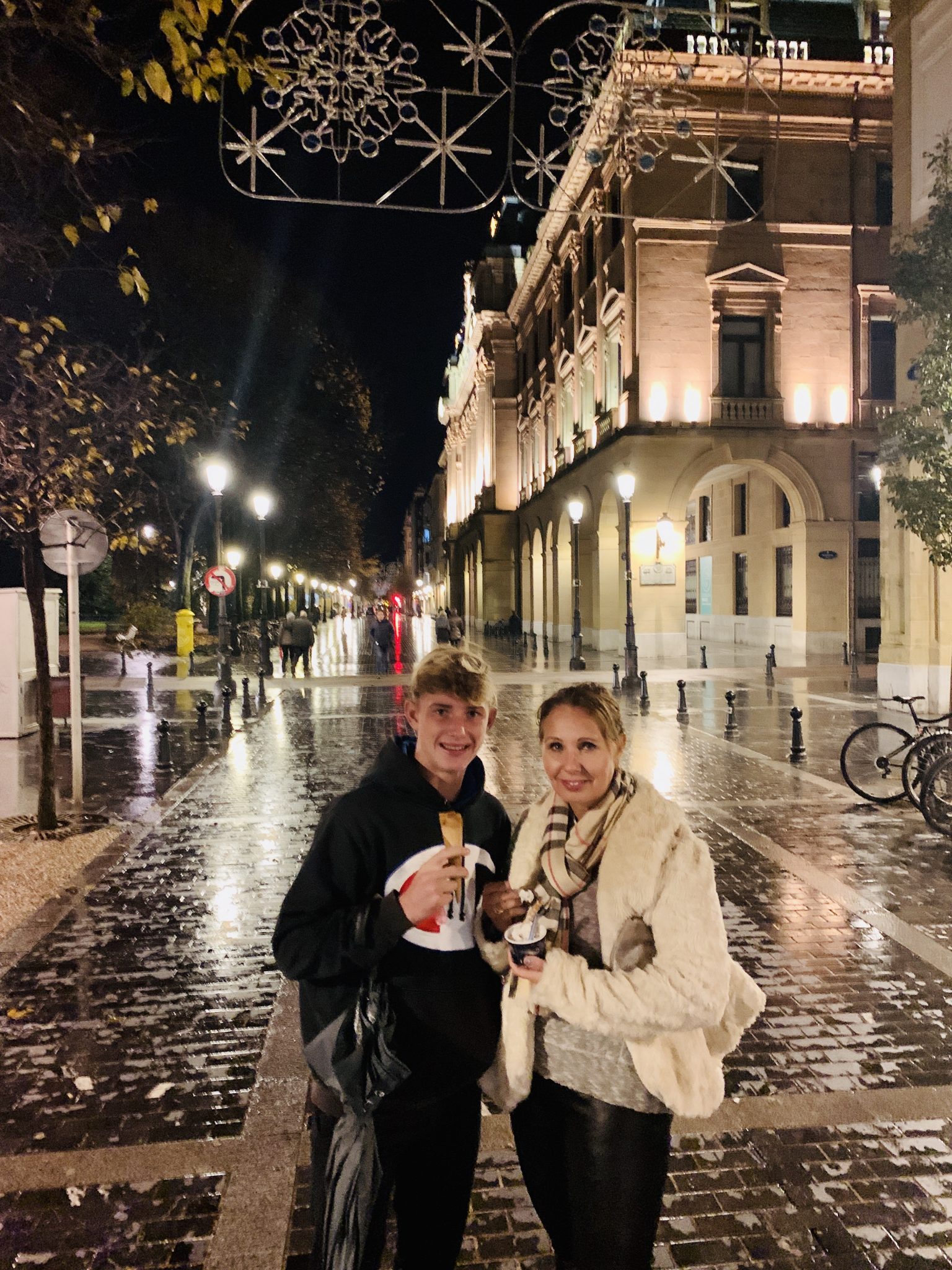 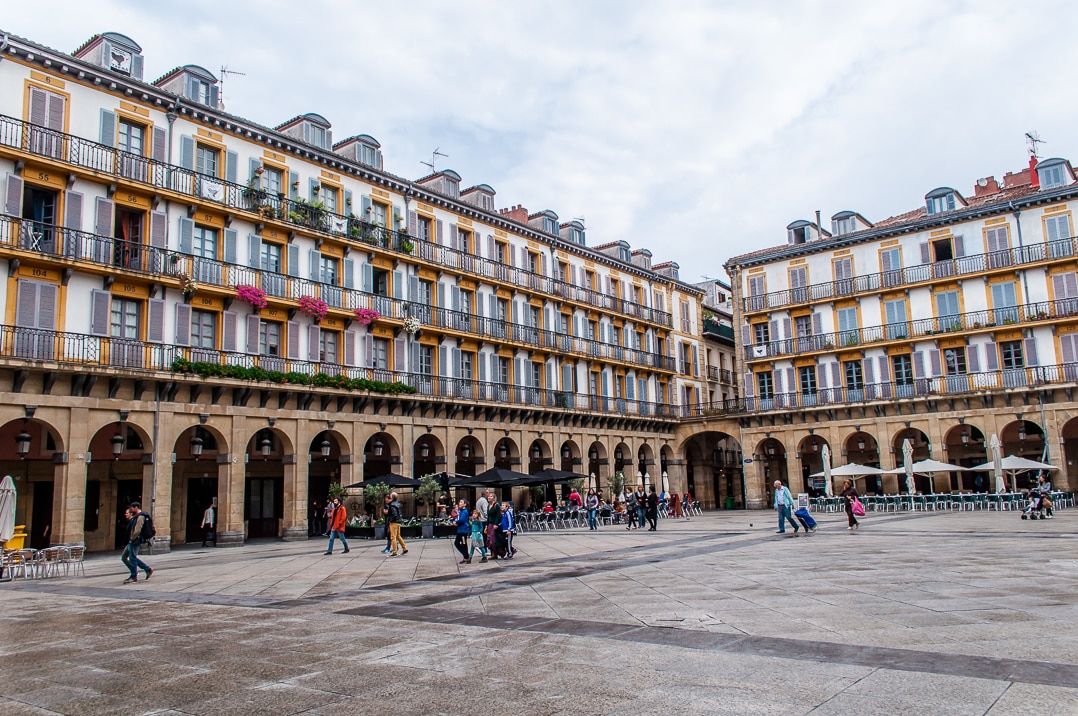 Old Town is the most visited part of San Sebastián. It’s located at the base of Mount Urgull and surrounded by the Bahía de la Concha and Urumea River. Old Town preserves the traditional and historical vibe of San Sebastián perfectly with beautiful cobbled streets. Old Town is filled with various monuments and churches, and at every corner you’ll find traditional pintxos bars. Constitution Square is located in the heart of the neighborhood and you can’t miss the colorful facades. Constitution Square was originally a bullring, and to keep part of its history, the numbers on each balcony remain today. 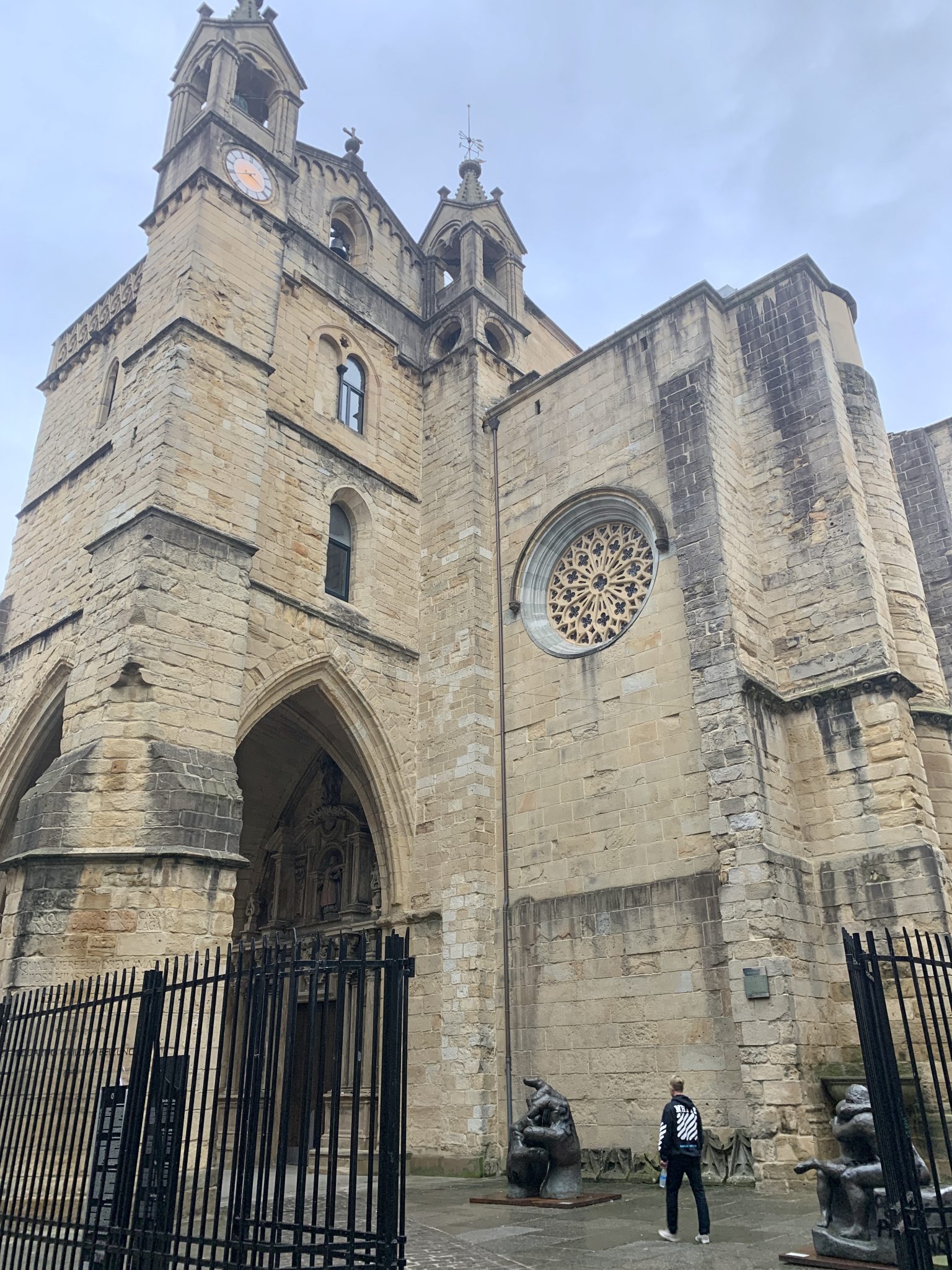 Church of San Vicente was built in the sixteenth century, and claims to be the oldest temple of San Sebastián. Those who are baptized in this parish are called “koxkeros” that refers to the “koxkas” the outgoing stones of this church. 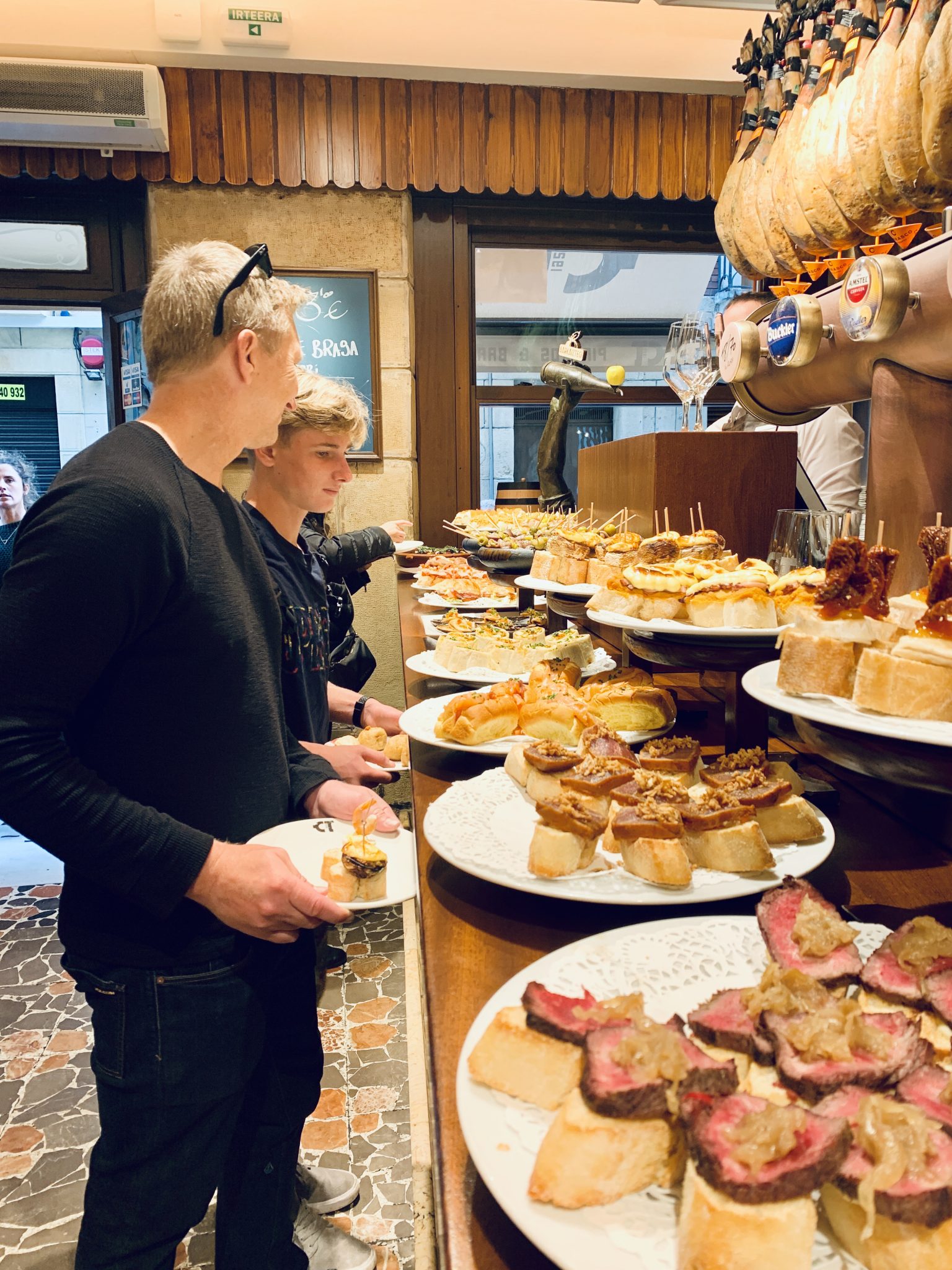 Pintxos bars offer hundreds of options of small portions of food, to sample some of the delicious basque cuisine. Most bars have the food on top of the bar where you grab a plate and help yourself. The idea is to have a drink (usually a glass of house red wine) and a small bite in a few different bars. Most locals would never go into one bar, load up a plate with many Pintxos and sit and have a couple of drinks. Part of the fun is wandering from bar to bar to see what delights they are serving. 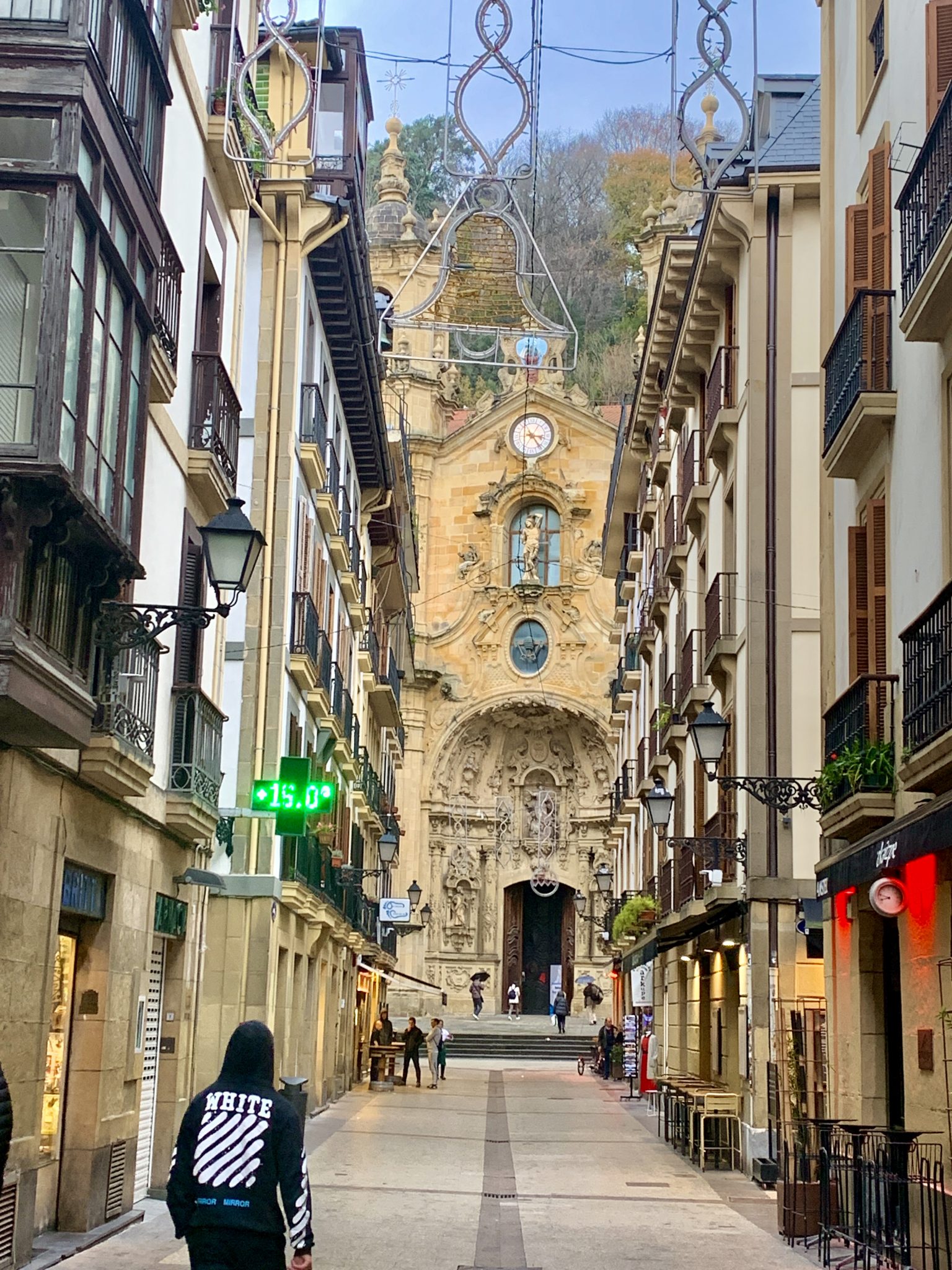 This beautiful church, is located in Old Town. It’s not easily spotted since the buildings are tall, but once you turn a winding corner and see the beautiful facade facing you, it looks like something from a magical fairytale. This church was built in the 18th century and is dedicated to St. Sebastian, who proudly stands on the facade watching down over his people. 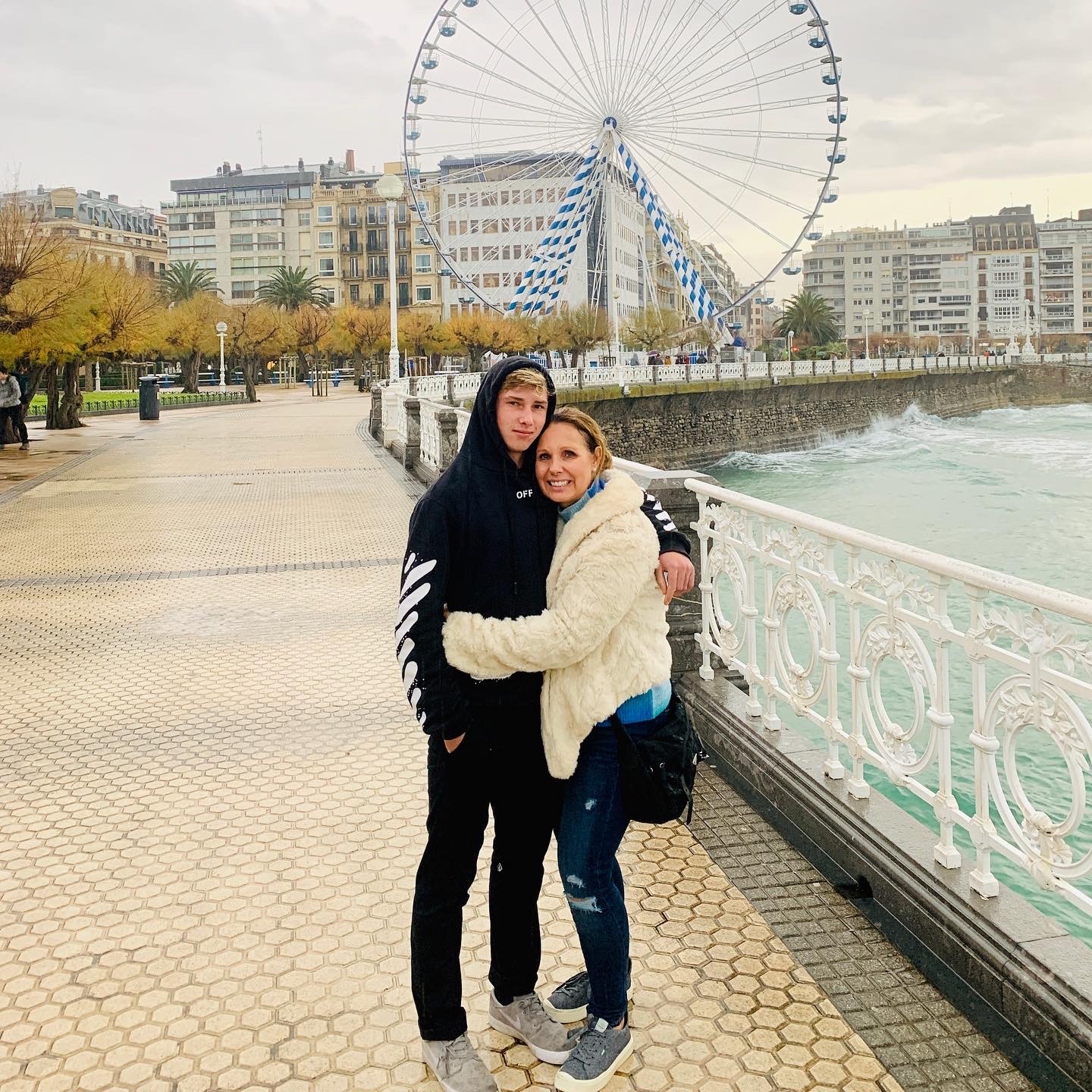 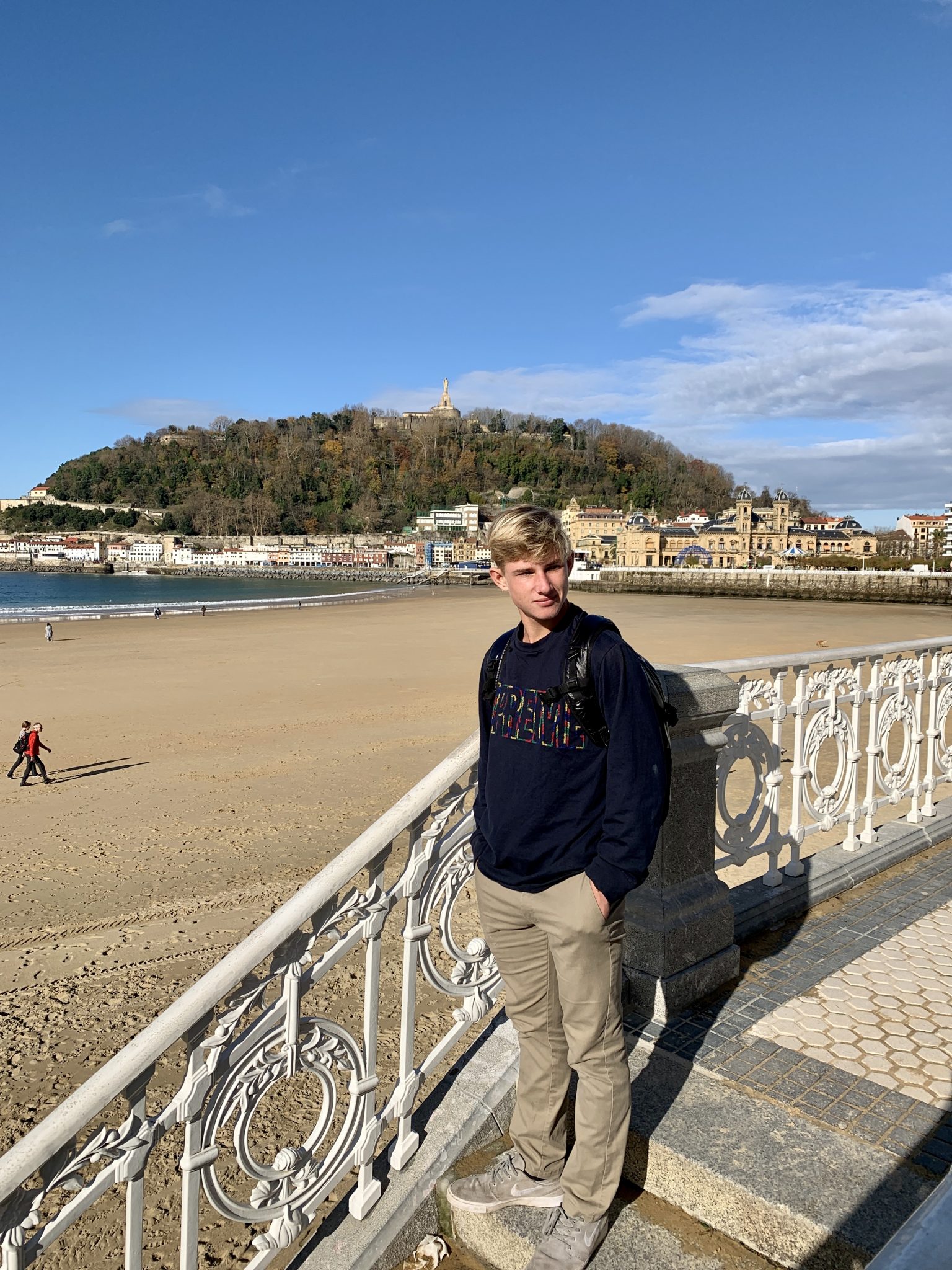 San Sebastián beach is simply stunning, and some say it’s the best city beach in Spain.  The promenade is lined with tamariz trees, and we walked the whole crescent shape. Santa Clara Island sits in the middle of the bay, and we sat on the beach and watched people swim to the island and back. The fine white sand is so clean, and it’s the perfect place to relax and enjoy your surroundings. 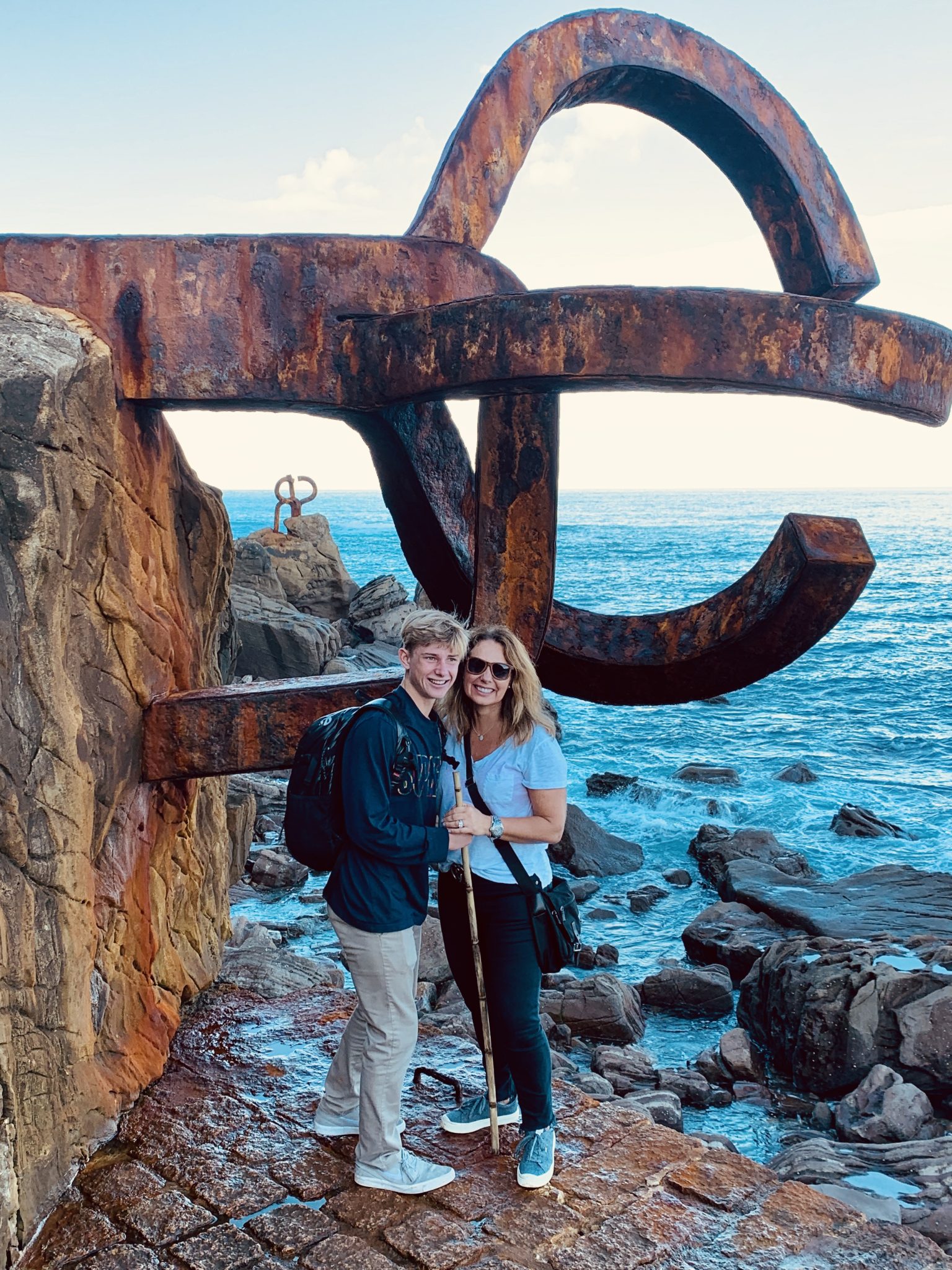 There’s fantastic artwork all over San Sebastián. We particularly loved the group of sculptures by Eduardo Chillida located on one end of La Concha. Three steel structures are embedded into the rocks, with each one weighing about 10 tonnes each! 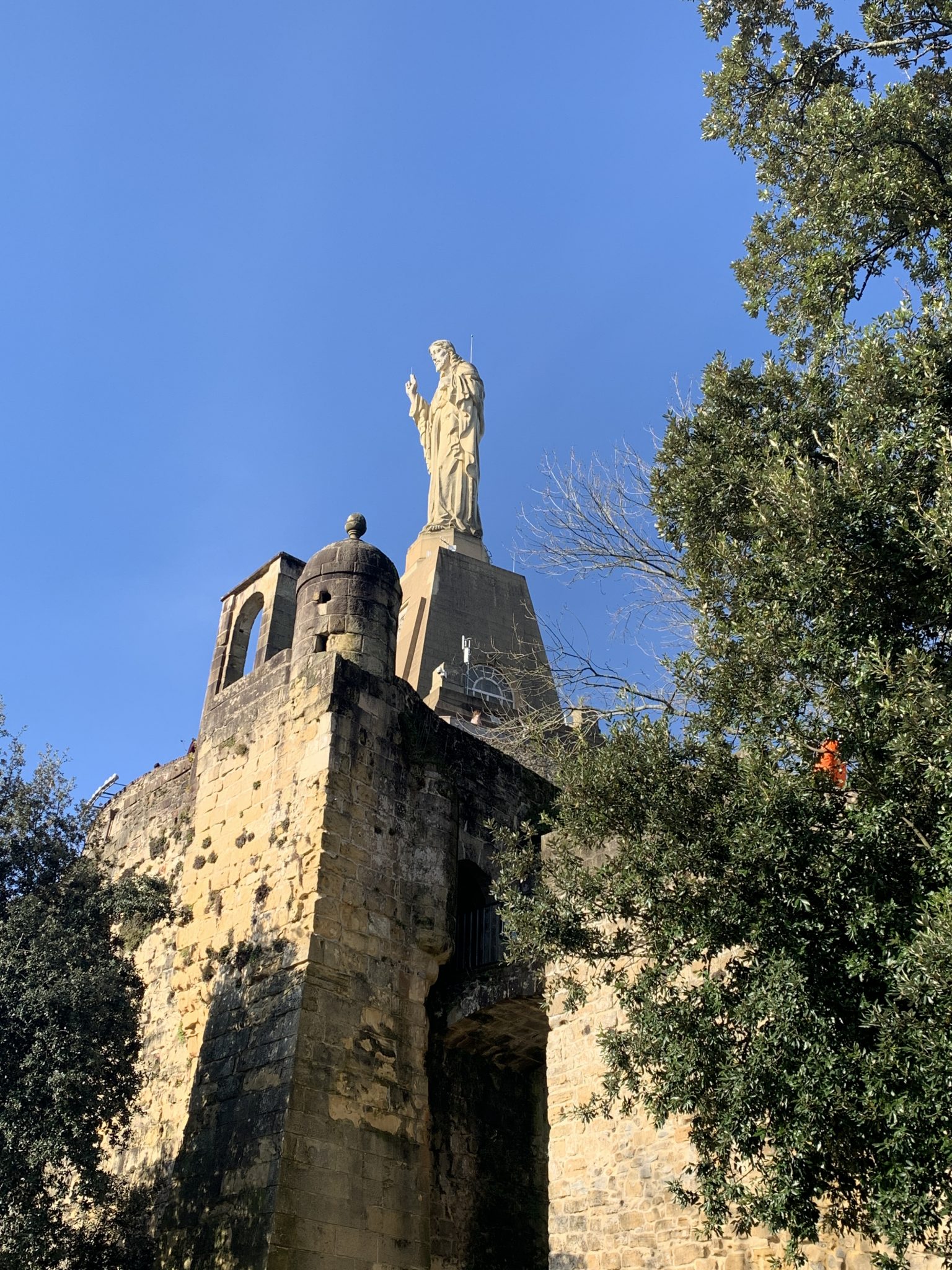 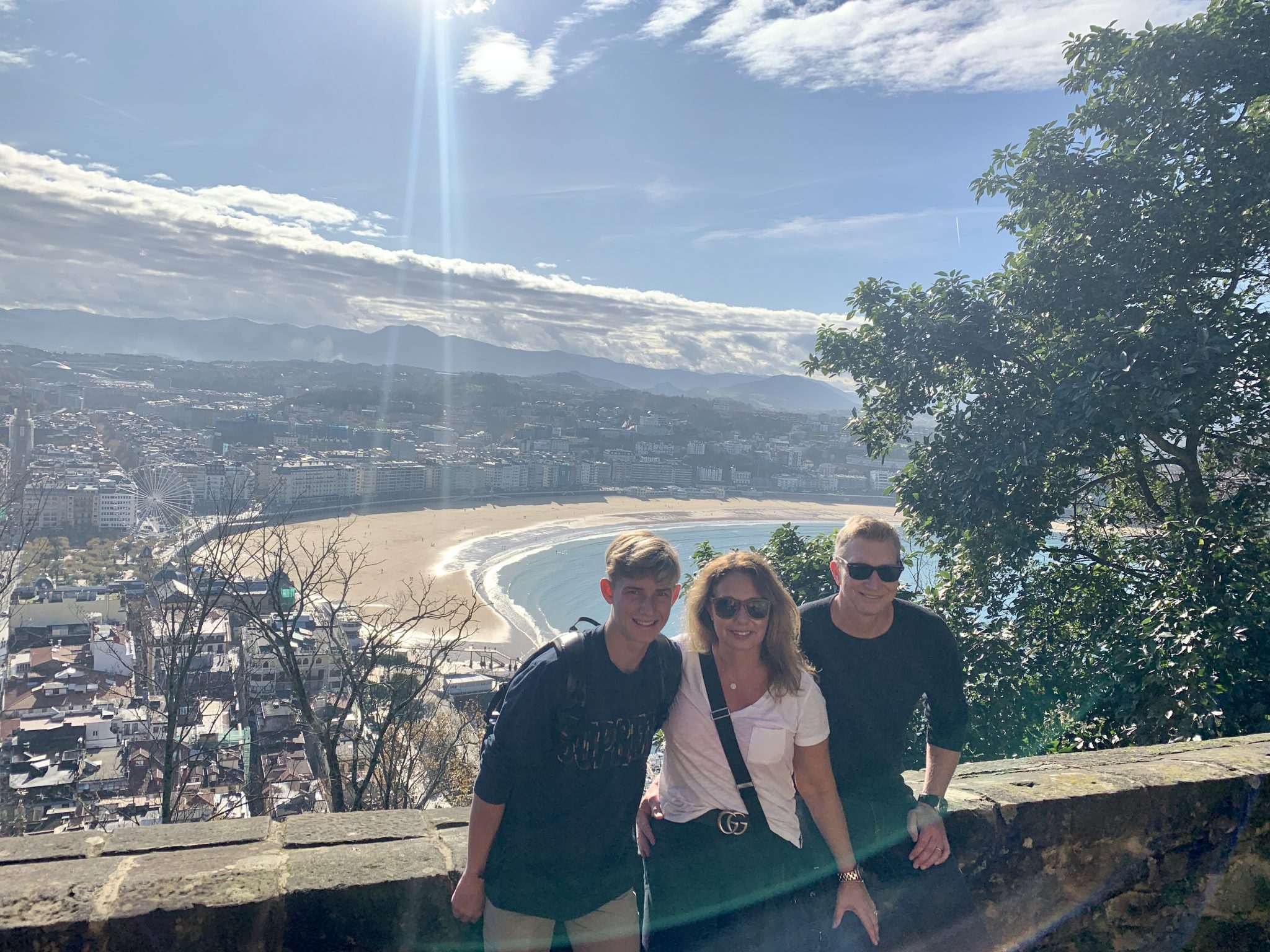 Three mountains surround San Sebastián, and offer incredible panoramic views of the city. We climbed the steep hill to check out the majestic views, and see the large statue of Jesus up close and personal. It reminded us of climbing up to see Christ the Redeemer in Brazil. At the top, in addition to fantastic views, there’s a small historical museum sharing the history of San Sebastián. 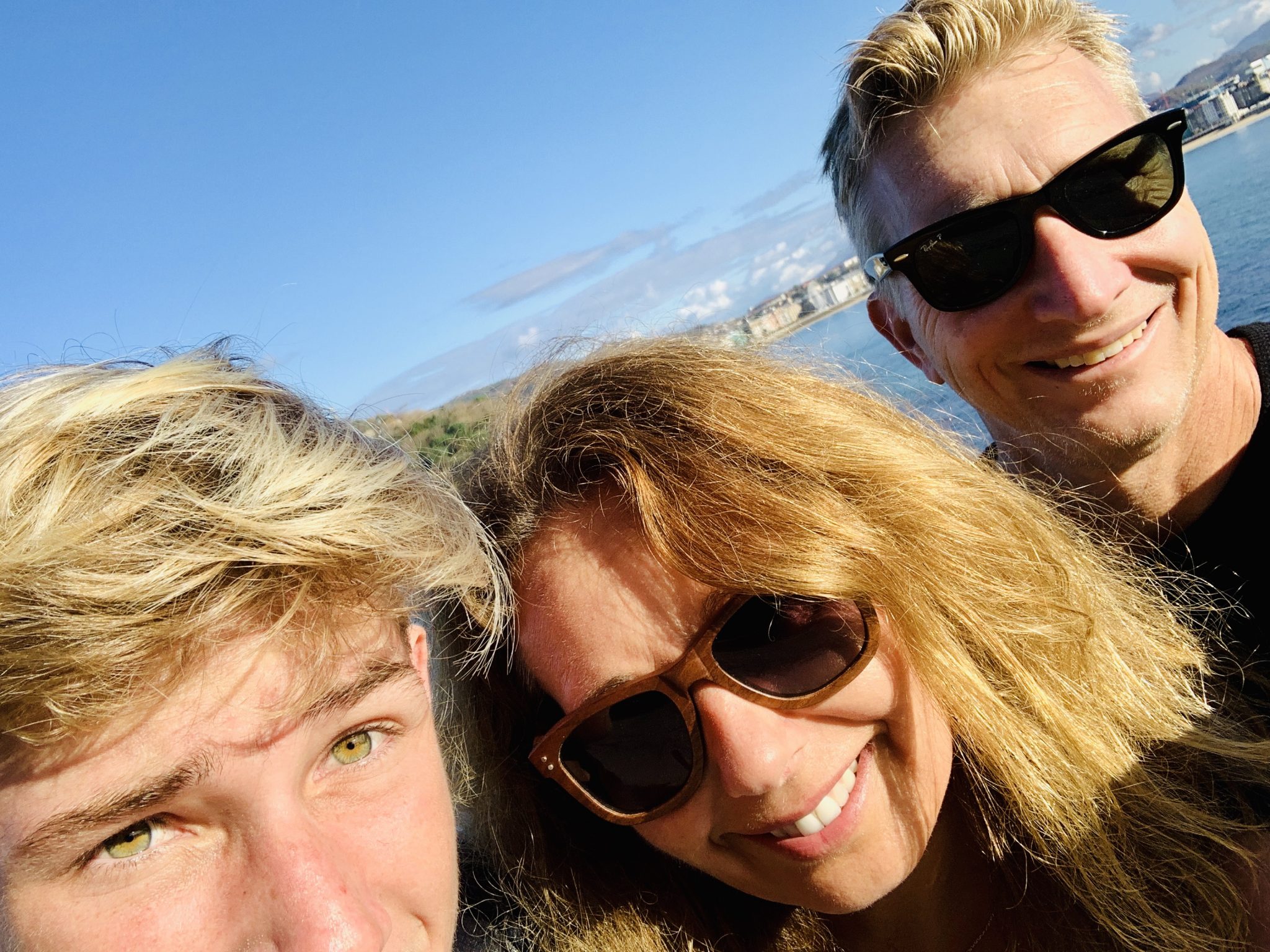 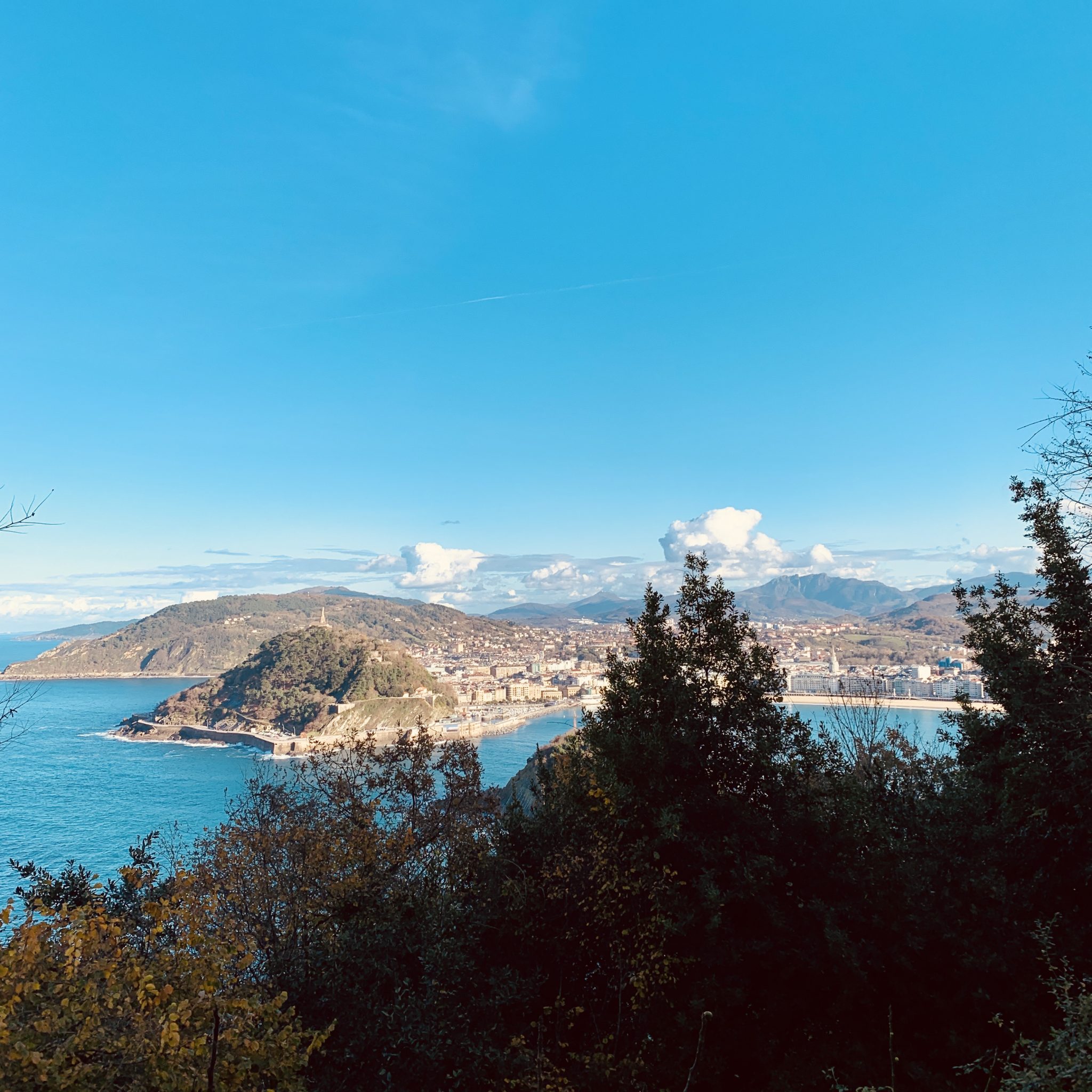 There’s a century-old funicular railway to take you to the top of this mountain, OR, you can grab your water and walk. We were intrigued by the large fort on top of Monte Igueldo and decided we were up for the loooooong hike to check it out. We walked up the steep, winding road, past the most beautiful homes until we reached the top. At the top, there’s a fort, hotel, and an old school carnival where we ate the most delicious churros. 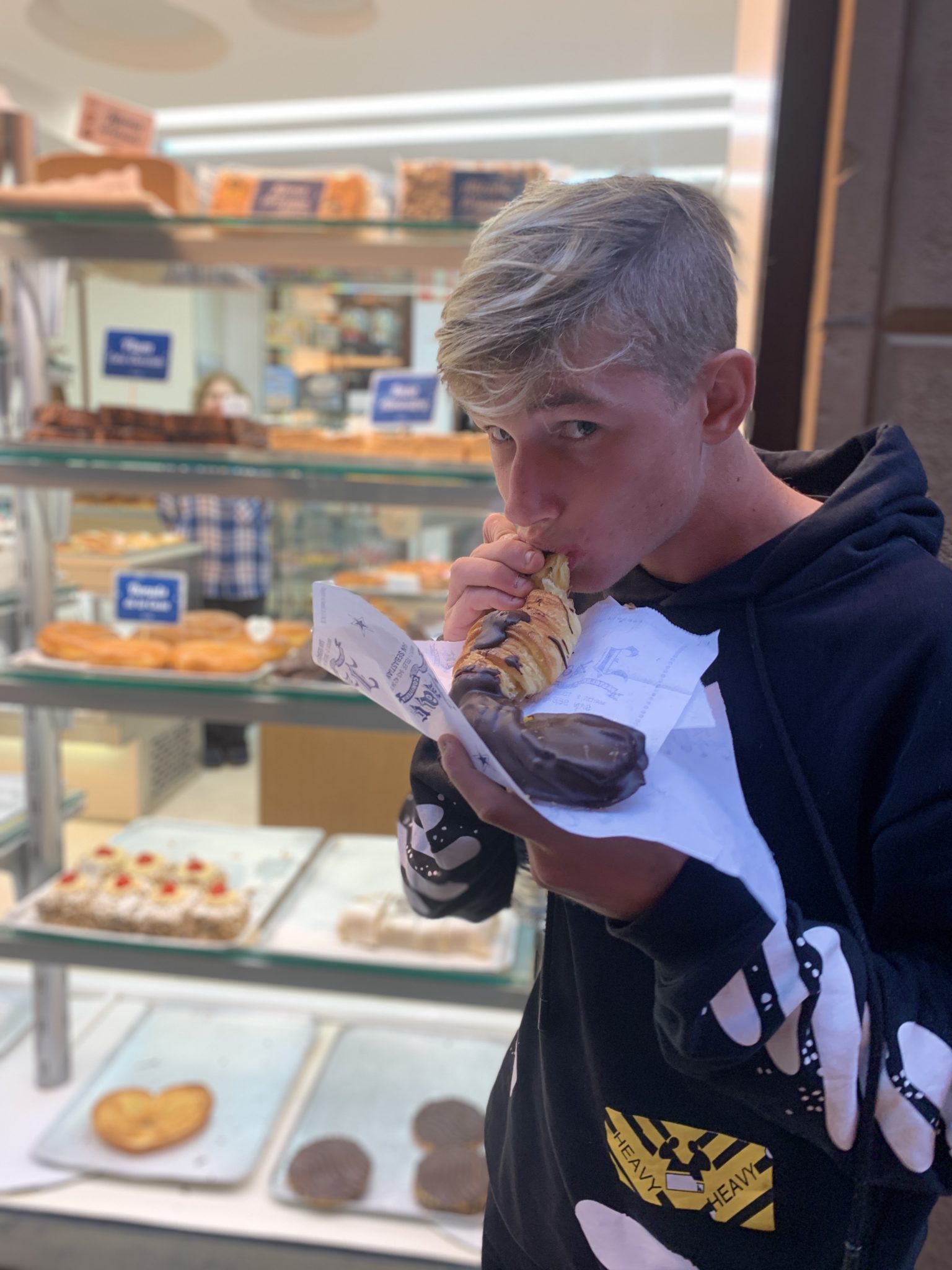 Have you been to San Sebastian Spain? What were your highlights? Thinking of going? Let me know in comments below and join me on Instagram and Twitter!