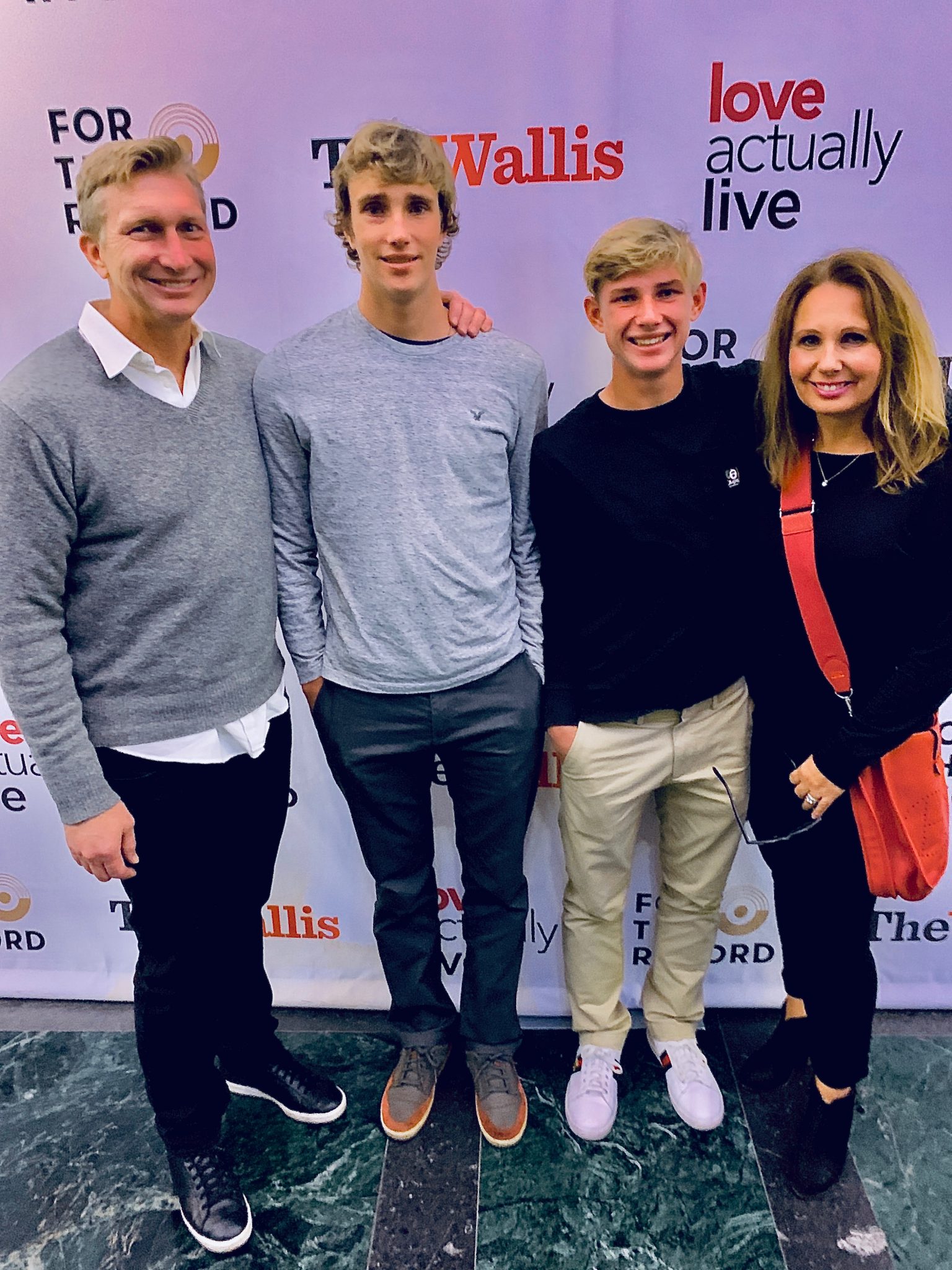 If you’re looking for a night filled with charm, holiday spirit and nostalgia this holiday season… RUN to see Love Actually Live at the Wallis Annenberg Center for the Performing Arts.  ‘Love Actually’ is a seasonal cult classic, and may be my favorite holiday movie of all time. The film is a celebration of love with all of the messiness and complications, the holidays, and of course it’s seeping with ‘British-ism’s’. It’s hard not to fall in love with the characters in the intertwining stories, and there’s nothing quite like Christmastime in London.
I was so excited to see ‘Love Actually Live’  in Los Angeles with my family, and see my favorite holiday movie transformed into an immersive theatre production. 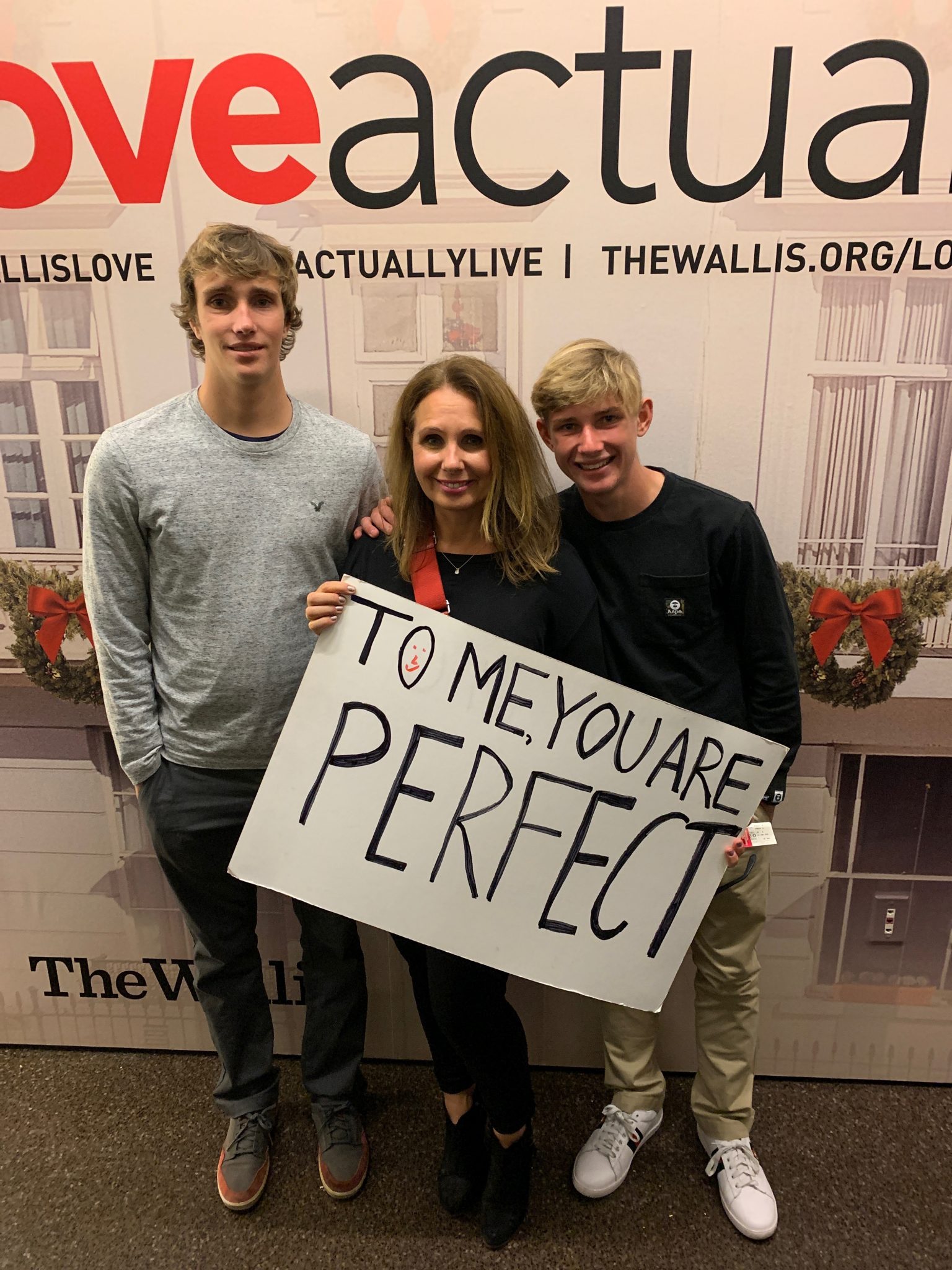 From the minute we walked into the Wallis in Beverly Hills, it was a throwback to the movie. We knew we were in for a great night.  The classic movies quotes on hand written cards in the entrance were a fun touch. 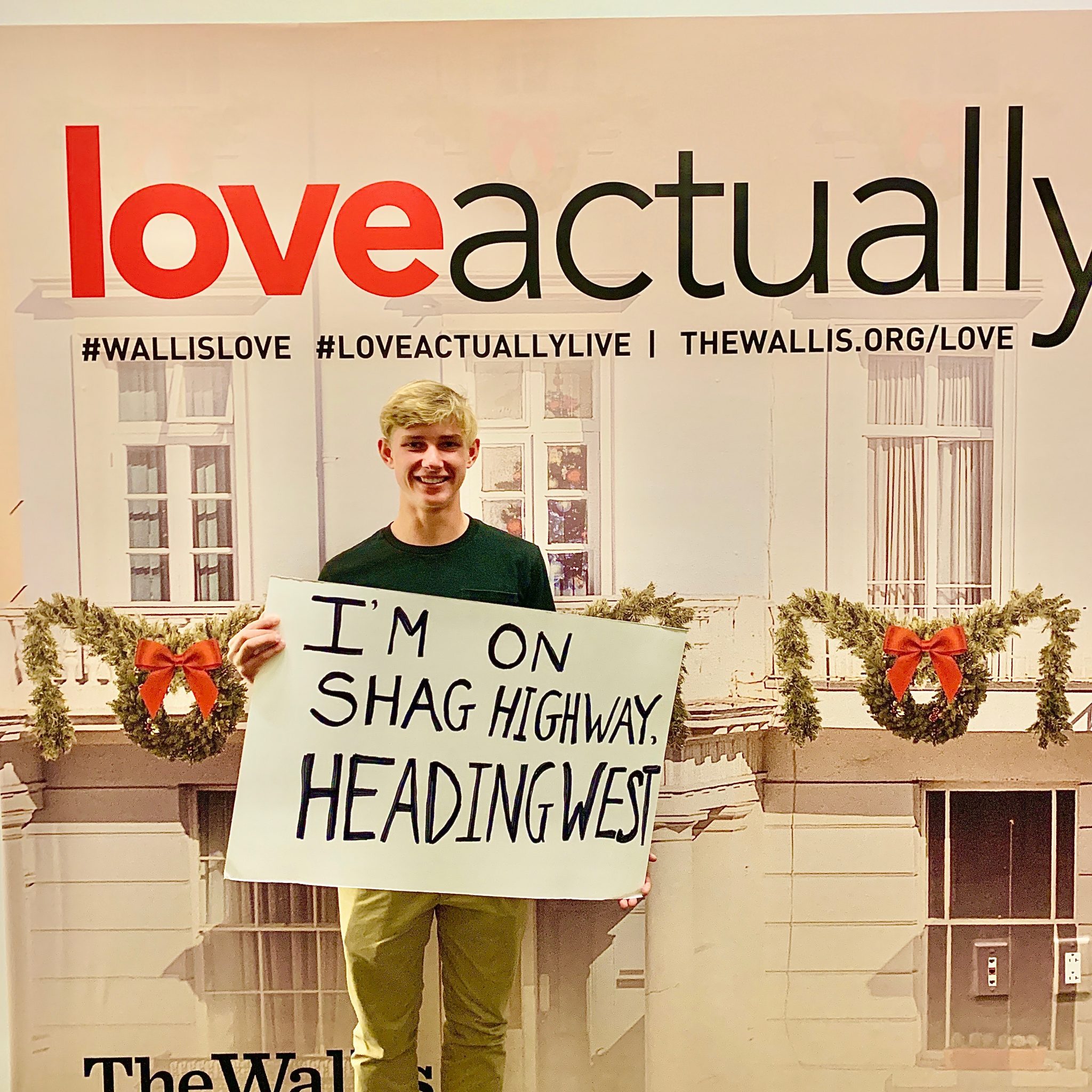 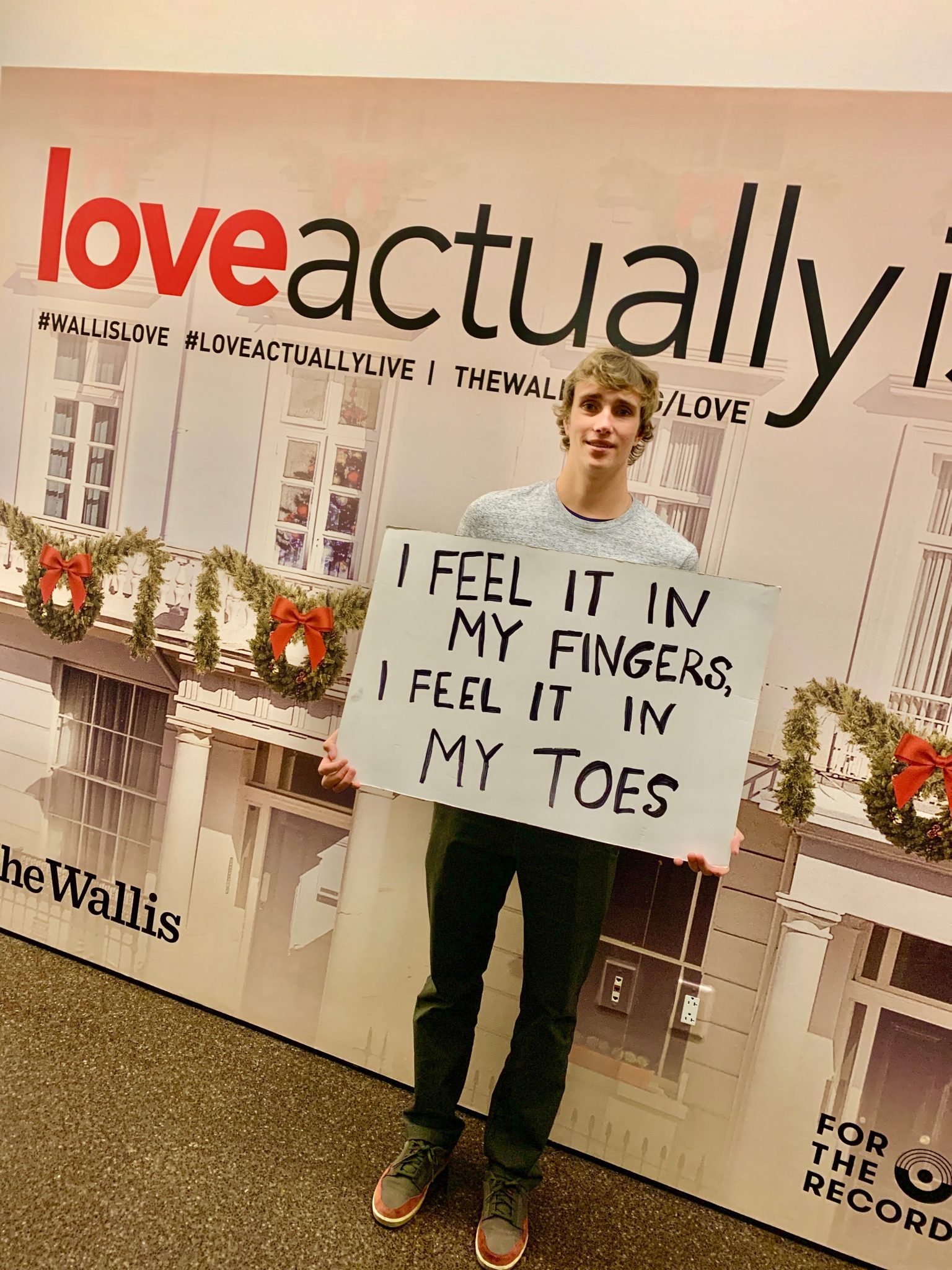 The whole show was extremely clever, and walked through the various intertwining storylines using song, theater and film. The cast sang original songs and classic songs from the film to tell the story. The set was stunning with the orchestra framing a twinkling Christmas tree on a raised stage, and beautiful rotating sets created settings for each storyline. The cast also interacted with the audience during the show for an immersive theatre experience.
Screens float in and out showing scenes from the film, while the cast performs classic songs from the soundtrack.
When ‘Billy Mack’ sang the line “I can feel it in my fingers… I feel it in my toes” the audience immediately began to sing along with each and every word!
There were a few highlights for me during the show. It was incredible during ‘Peter and Juliets’ wedding scene, as musicians popped up around the whole audience during the spectacular ‘All you need is love’ number, bringing it to life. The actors encouraged audience members to participate, clap and sing along, pulling me deeper into the stories. The execution of the Joni Mitchell classics ‘River’ and ‘Both Sides, Now’ broke my heart in the most beautiful way, and the bluesy performance of ‘White Christmas’ created a poignant and soulful moment.
When lovable ‘Colin’ gave his famous line, “I’m on shag highway headed West”, the whole audience clapped and cheered.

The show slowly brings the audience to the grand finale we all know so well, and I think my favorite scene of all was when the old-ex heroin addict ‘Billy Mack’ performed during the curtain call.  During the film he told Michael Parkinson, “If I reach Number One, I promise to sing the song stark naked on TV on Christmas Eve.” And of course ‘Billy’ kept his word for his comeback performance.

If you’re looking for a perfect evening with family and friends to celebrate the holidays, this is it. This production manages to tear your heart out, put it back together, and somehow leave you with a faith in humanity. It’s filled with nostalgia and Christmas cheer from beginning to end, bringing all the festivity, emotions and holidaycheer that the movie does.

“Whenever I get gloomy with the state of the world, I think about the arrivals gate at Heathrow Airport. General opinion’s starting to make out that we live in a world of hatred and greed, but I don’t see that. It seems to me that love is everywhere. Often, it’s not particularly dignified or newsworthy, but it’s always there – fathers and sons, mothers and daughters, husbands and wives, boyfriends, girlfriends, old friends. When the planes hit the Twin Towers, as far as I know, none of the phone calls from the people on board were messages of hate or revenge – they were all messages of love. If you look for it, I’ve got a sneaky feeling you’ll find that love actually is all around.” – Prime Minister 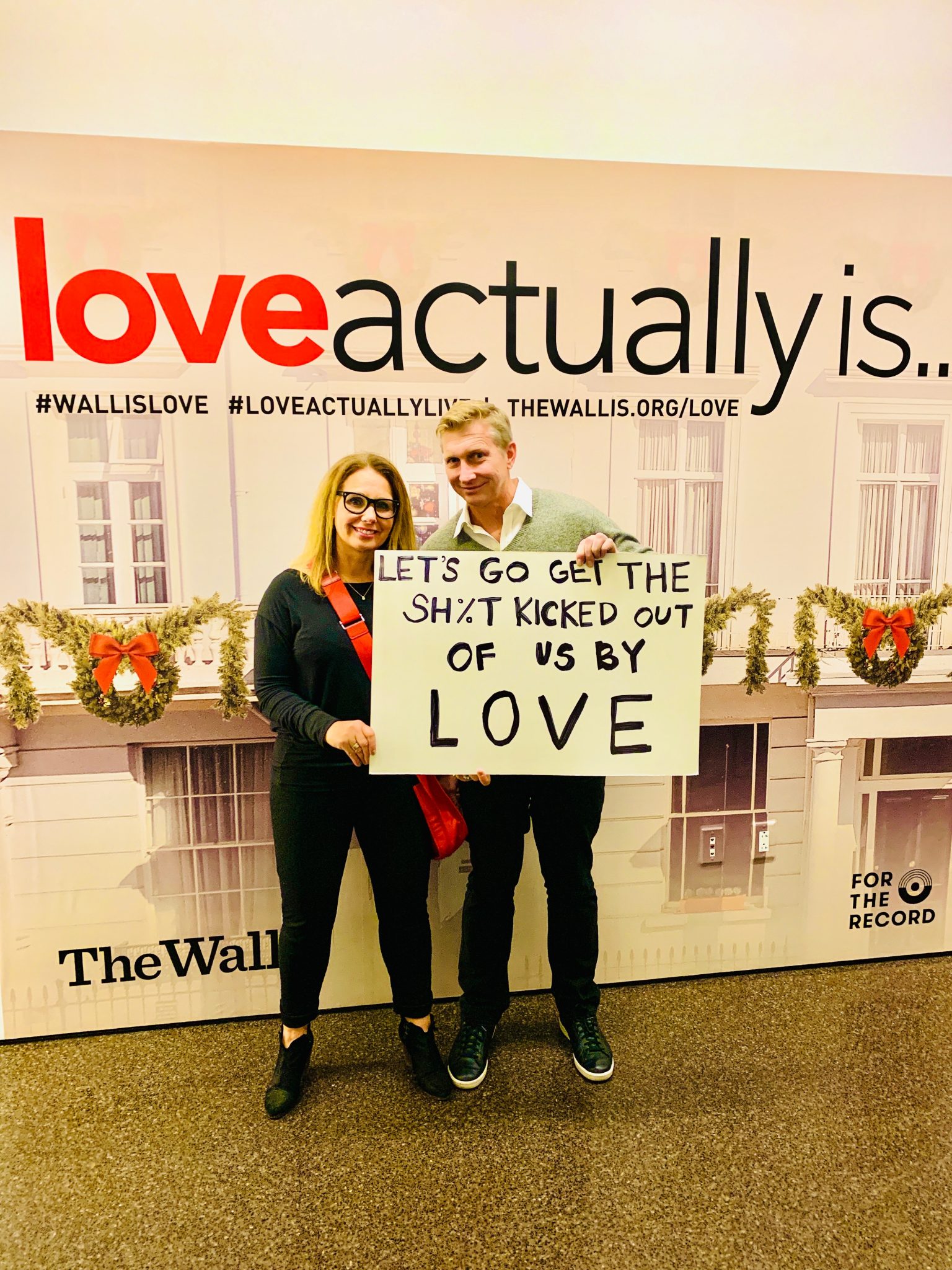 (LINK IN BIO) Thank you @oursouthbay magazine and

We lost a father and grandfather after a courageou

Having the energy of both boys in my house togethe

TOP GUN: MAVERICK is a masterpiece with breathtaki

Honored to ride in place at the @tourdepier today,

Nothing beats a night out with good friends sharin

Thrilled to take this crew to the @IMAX screening

Four long months since I hugged this gorgeous youn

I never for one minute take these views for grante

Sinking into a soft, fresh, and clean bed with bea

(NEW POST) What a treat - getting outside of the S

We decided to explore our own backyard in Southern

Tip of the day: really important to pay attention