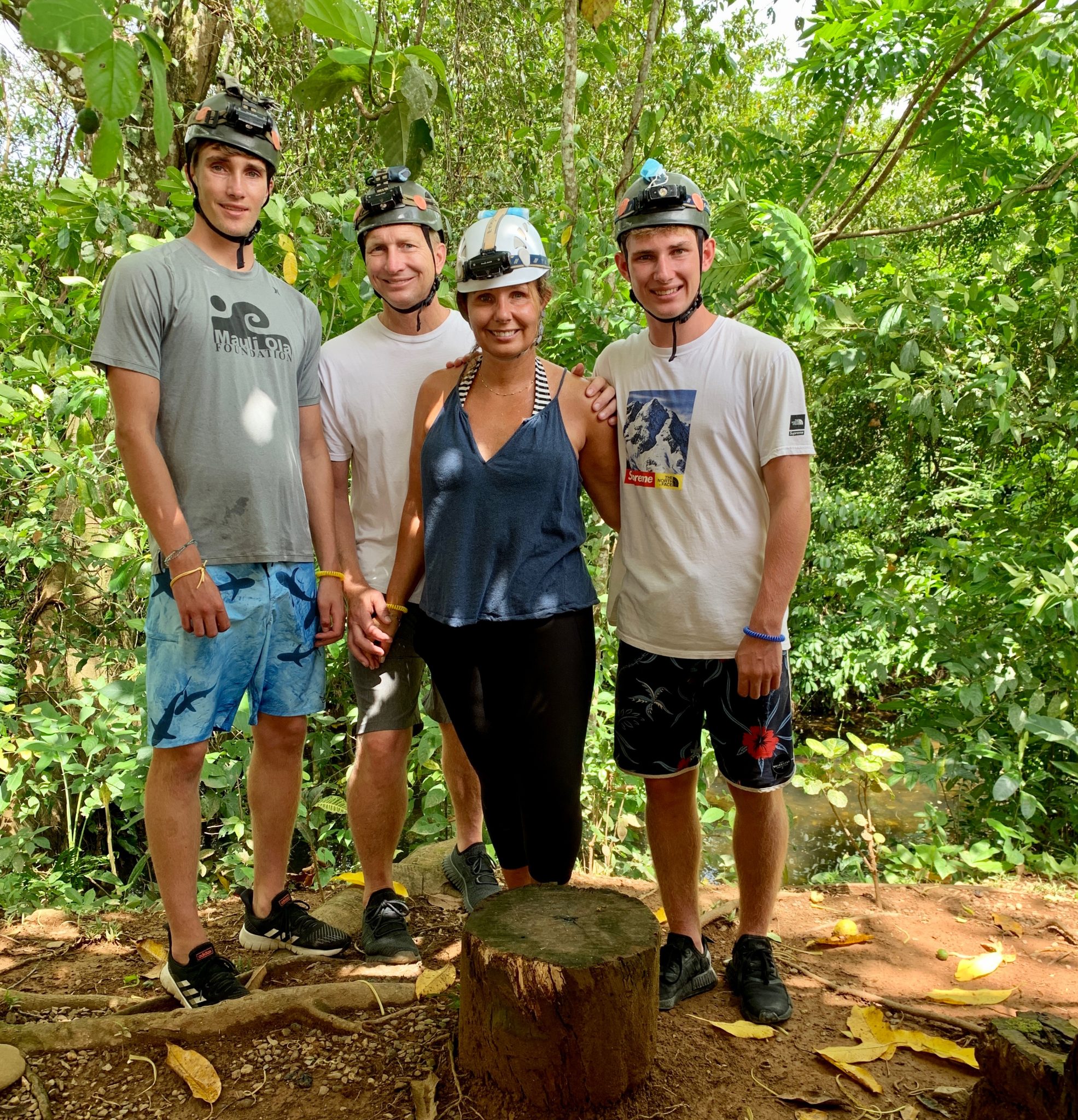 Deep in a cave in Belize’s jungle is a sacred Mayan burial site, where the remains of 14 human sacrifices have been found. The Belize Actun Tunichil Muknal (ATM) cave tour is one I promise you absolutely cannot miss. In order to preserve the integrity of the site, only authorized tour guides are allowed to bring people into the cave. Tourist dollars are very much needed in Belize (especially right now), however this is balanced with preserving the sacred caves. The government limits visitors to 125 per day, in groups of 8. 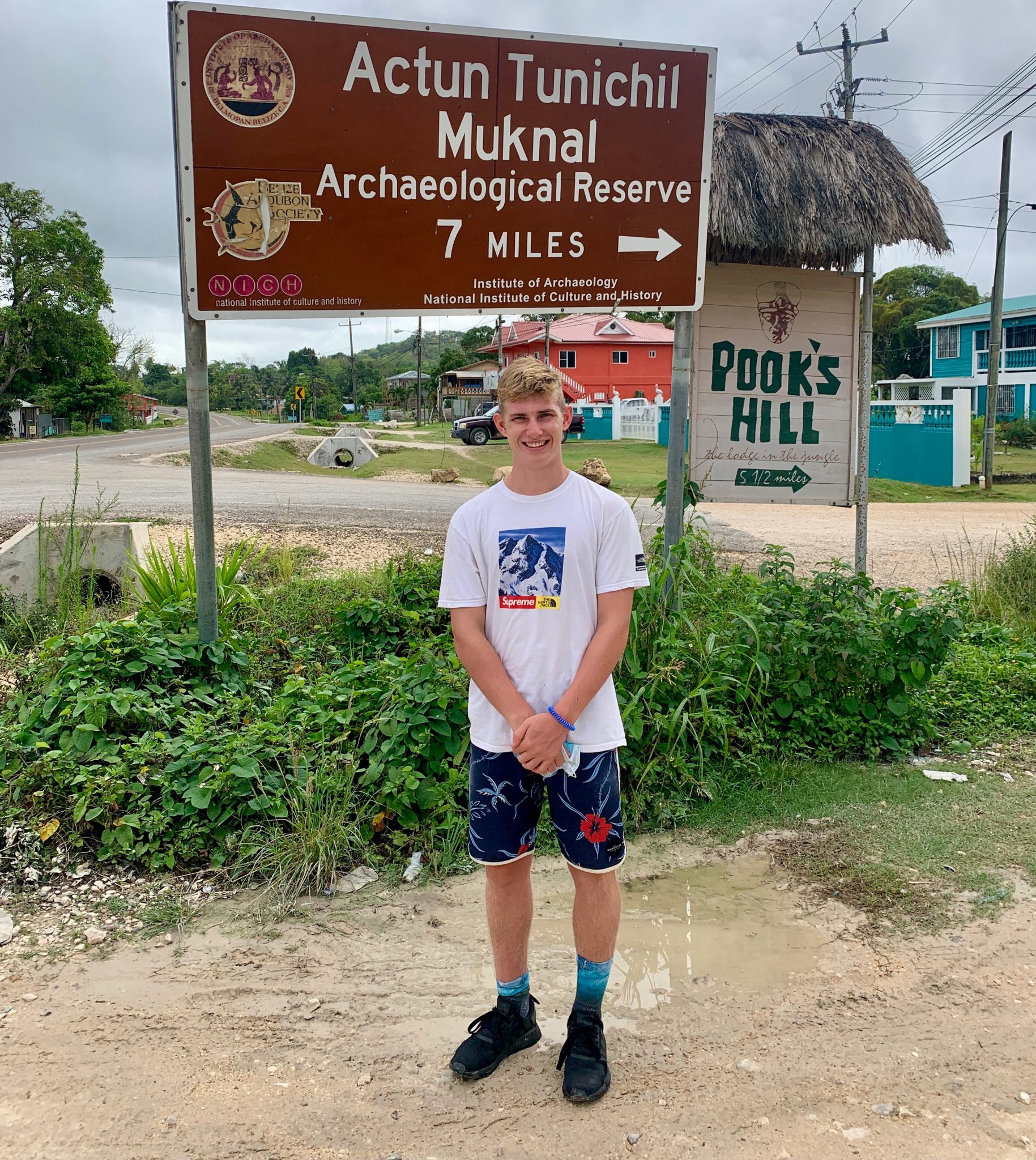 Many operators offer this tour, and after much research we decided to go with MayaWalk.com. Mayawalk Tours is an eco-friendly, family owned, local tour operator based in San Ignacio, and have been operating since 1997. They are ranked #1 with Tripadvisor and their reviews are fantastic.

1. We were collected from our accommodation at Black Rock Lodge at 7am in the morning. It took about 90 minutes to get to the Tapir Mountain Reserve from San Ignacio. We were driven through lush jungle and our guide pointed out the glorious wildlife long the way.

2. Important to note that cameras are strictly prohibited inside the caves. A tourist dropped his camera on one of the ancient skulls and smashed it accidentally. Because of this the government banned all cameras from ATM cave tours (true story!) 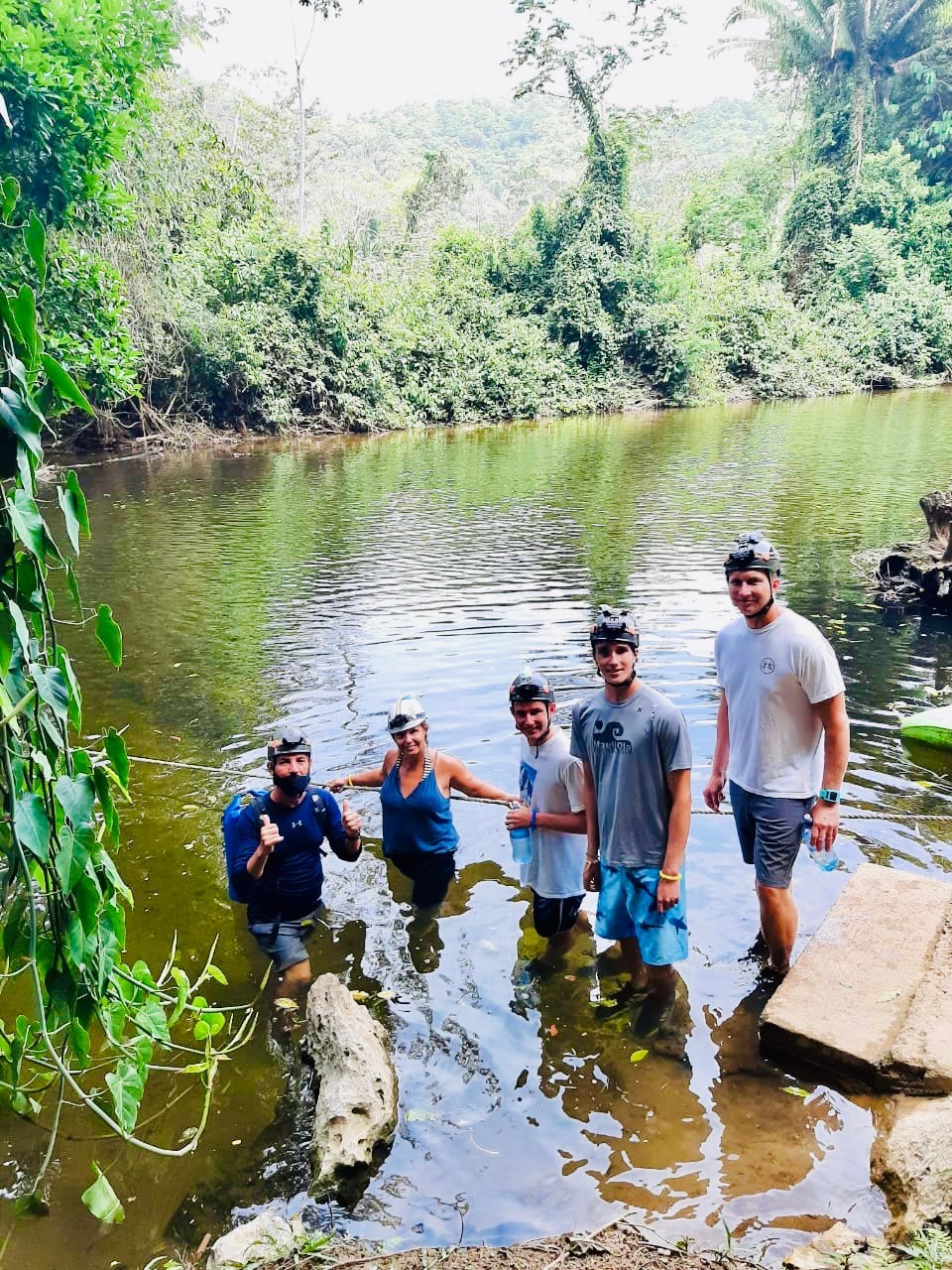 3. Once we arrived at Tapir Mountain reserve, we were given helmets and began our 45 minute jungle hike to the entrance of the cave. The hike wasn’t particularly strenuous, and most people wouldn’t find this a problem at all. Walking through the dense jungle we listened to the howler monkeys, and saw lizards, tapir tracks and spiders. It was apparent we were very much in their world. We crossed three streams varying from knee to waist high water. We were given a rope to help with the first crossing since this was the deepest. It was also suggested we not wear bug spray or sunscreen as both can damage the jungle ecosystem. 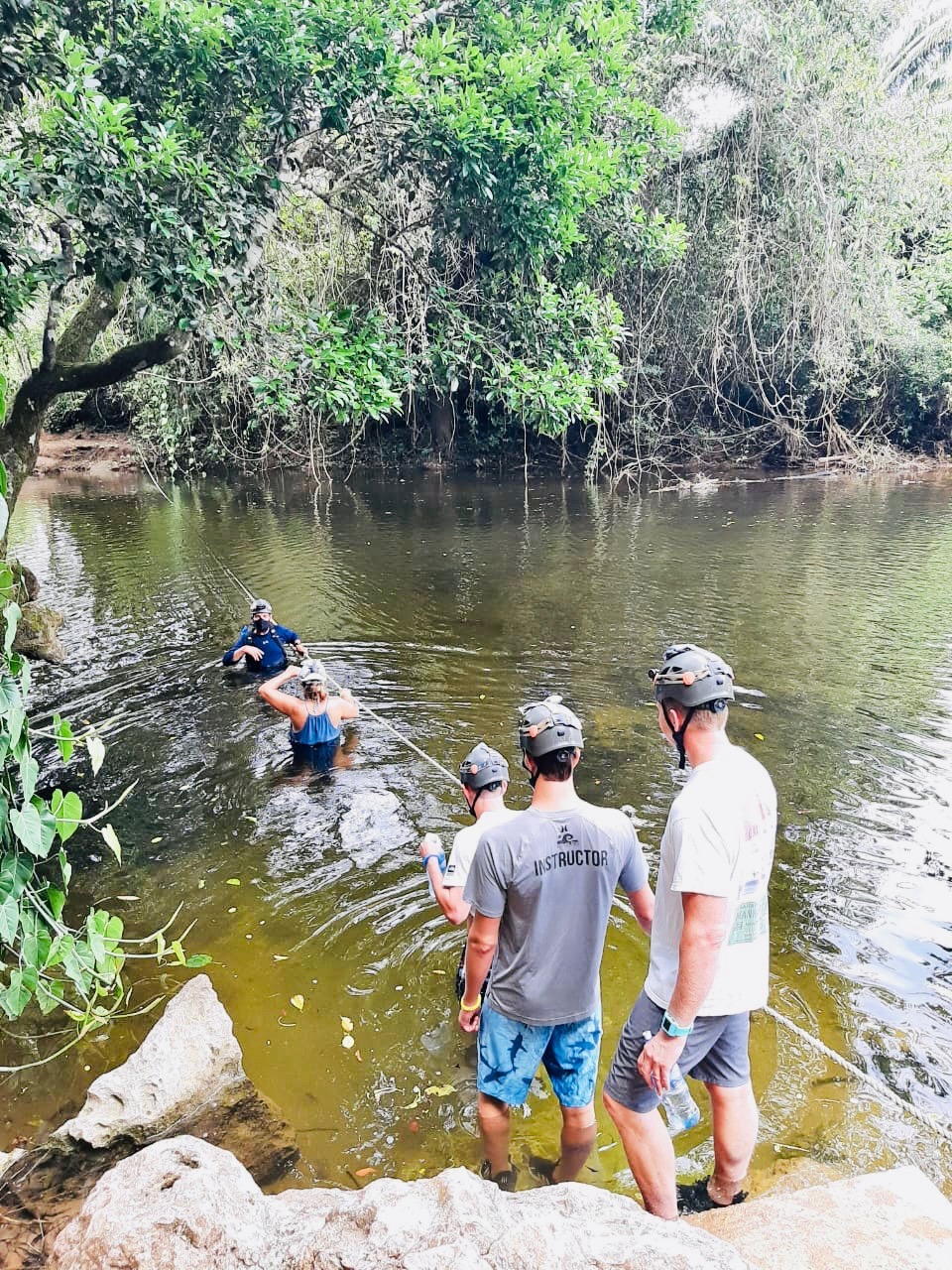 4. When we reached the cave’s entrance, we had to swim across a spring-fed pool (life vests are provided if needed), about 20 feet, to reach the dark entrance of the cave. The pool was filled with crystal blue water and  tiny fish – it was beautiful. I’m not gonna lie – I’m not a fan of dark enclosed spaces, so I had to really focus on my meditation and breathing here to try and calm my mind and prepare for the next three hours in dark cave. 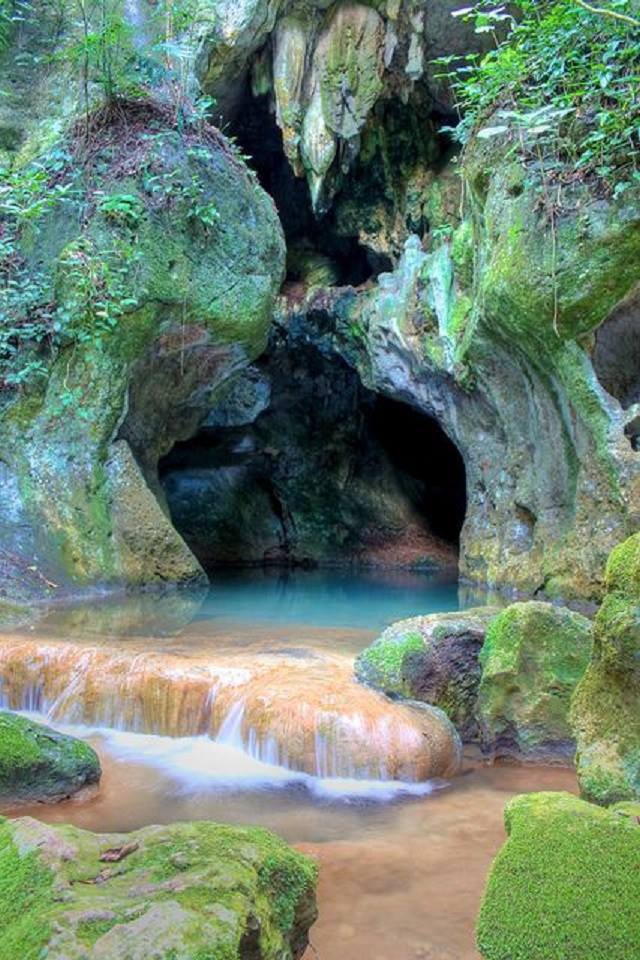 5. Once inside the cave, it was clear why you can only enter with a tour guide. He navigated us through an extensive underground maze of tunnels, tight passageways and chambers. We walked single file and climbed rocks, swam under rocks, hoisted ourselves through tight spaces and tried to avoid the bats and large scorpion cave spiders. Julian was behind me and saw me put my hand on at least three scorpion cave spiders, but didn’t tell me until I was out of the cave!!!!  Thank goodness he waited or I would have probably had a heart attack right there in the cave!!!  The only light in the cave was from the lights on our helmets – I was completely out of my comfort zone. Many of the chambers were filled with stunning crystalline stalactites and stalagmites. There are a couple of sections in the cave where the ceiling is low and we had to crouch really low to get past, but we moved through these small passageways quickly.

6. After about an hour we climbed about 30 feet up a large rock to enter one large cavern known as the ‘Cathedral’. Here we were able to see undisturbed Mayan artifacts, including a gorgeous altar carved from native stone. We were asked to remove our shoes and wear socks to help preserve and protect the delicate limestone floor, since our bodies secrete oil and bacteria. 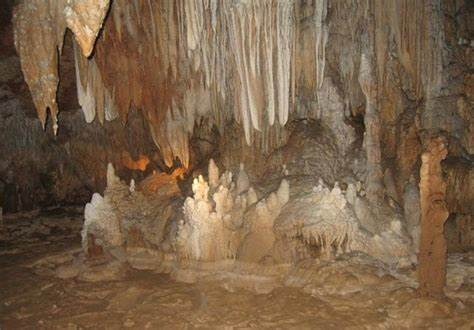 7. We continued to climb higher up a slippery ledge, to reach the sacred labyrinths where ancient Maya priests performed their rituals. We could sense the spirituality and importance of the cave immediately as we were deep in the bowels of the cave.

8. As we climbed deeper we saw many Mayan artifacts, potteries, and intact skeletons of children and young adults whose lives were sacrificed. The youngest remains were from a child estimated to be 1 year old. Archaeologists determined that most of the victims were killed by blunt force trauma, resulting in their skulls becoming crushed. We could see ritual vessels containing food and other offerings for the gods. The crystallized skeleton of the ‘Crystal Maiden’ lies at the back of this chamber, and archeologists have dated her death at just over 1,000 years ago. 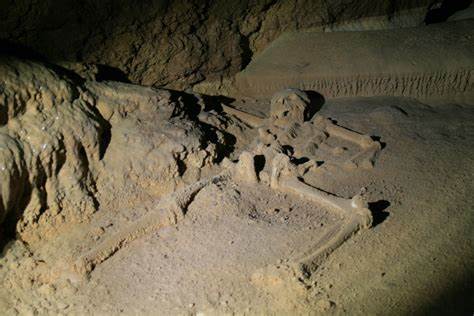 9. Archeologists are still working to discover why these people were sacrificed in this cave. One theory is that they were offered in a sacrificial ceremony in an attempt to appeal to the rain god during one of the driest and most difficult times in Mayan history.

10. We spent about three hours inside the cave with Hugh, our licensed and experienced guide. We then headed back to enjoy a delicious traditional Belizean lunch of rice and beans with chicken, plantain, dessert, and rum punch.

This tour was incredible for people of all ages, and was recently named the #1 Sacred Cave destination in the world by National Geographic. The Actun Tunichil Muknal caves are an underworld disconnected from heaven and earth. The tour is not only a physical adventure and geologically beautiful with its crystalline stalactites and stalagmites, but also an ancient spiritual experience.  I highly recommend you experience this if you find yourself deep in the jungles of Belize. 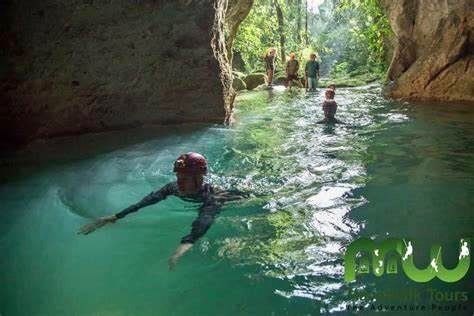 Not being able to take our own photographs forced us to live in the moment. Maya Walk provided me with photos to use for this post (note: all photo credit belongs to them)