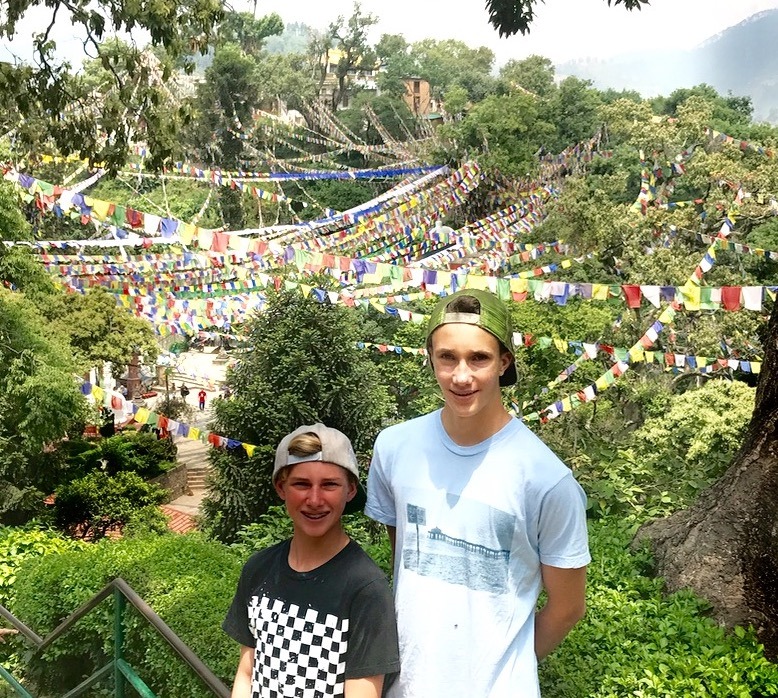 Kathmandu is one of the most magical and visually stunning cities on the planet, and is a jewel for cultural enthusiasts. There’s only one international airport in the whole of Nepal, so Kathmandu is the first destination for international travelers and is considered the gateway to the Nepalese Himalayas and tourism in Nepal. We explored Kathmandu, Chitwan National Park and Pokara before flying to Paro, Bhutan. 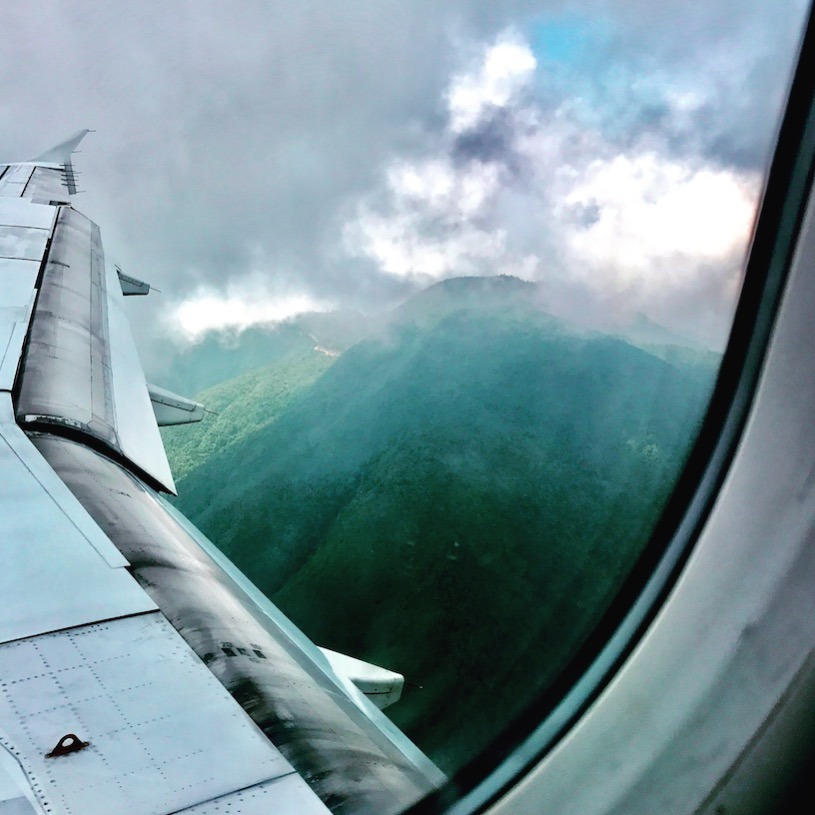 The flight into Kathmandu is simply breathtaking with panoramic views of the Himalayas from both sides of the plane. Kathmandu boasts seven UNESCO world heritage sites however sadly many of the historic sites were damaged or destroyed by the 2015 earthquake. Aside from the magnificent culture, the main feature of Kathmandu is its people. Nepalese people are incredibly welcoming, humble and gentle.

Here are 6 reasons to visit Kathmandu.

1. Explore the tourist neighborhood of Thamel

After a 24hr journey from Los Angeles, we were ready to rest and freshen up. It was lunchtime, we were all starving, and instead of dining in a local restaurant, we decided to avoid ‘Hangry’ (stop looking at me!) family members and eat lunch in the hotel (which is usually a no-no for us), to begin our afternoon adventure with full tummies. We devoured our first curry, naan bread, Everest local beer and milk shakes. That was a great call… we were fed, and ready to explore Kathmandu. 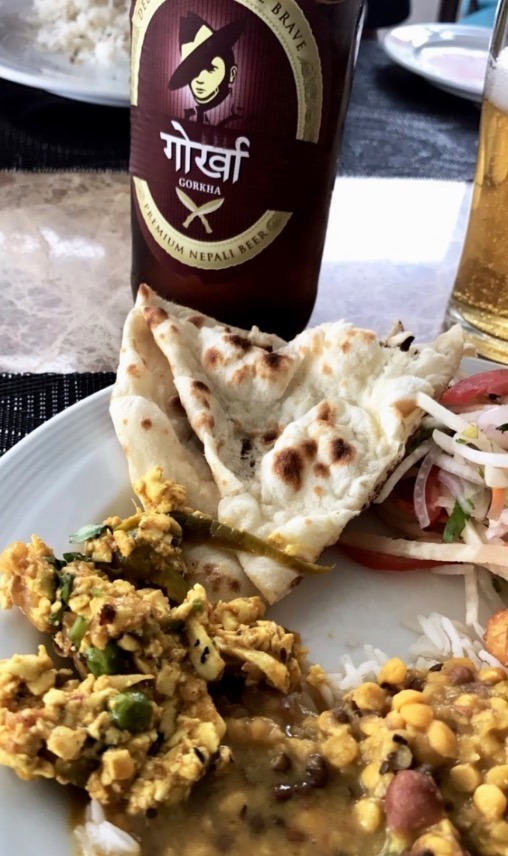 We immediately realized the stifling heat and poor air quality might be a problem. In fact most people wear medical masks in Kathmandu to avoid inhaling dust from the busy city, earthquake rebuilding (there is construction) and the dense population. After we explored the city, found our bearings, window shopped, battled street vendors, stopped for more cold beer (hey don’t judge, we were on vacay), we headed back to our hotel to try and reset our body clocks. 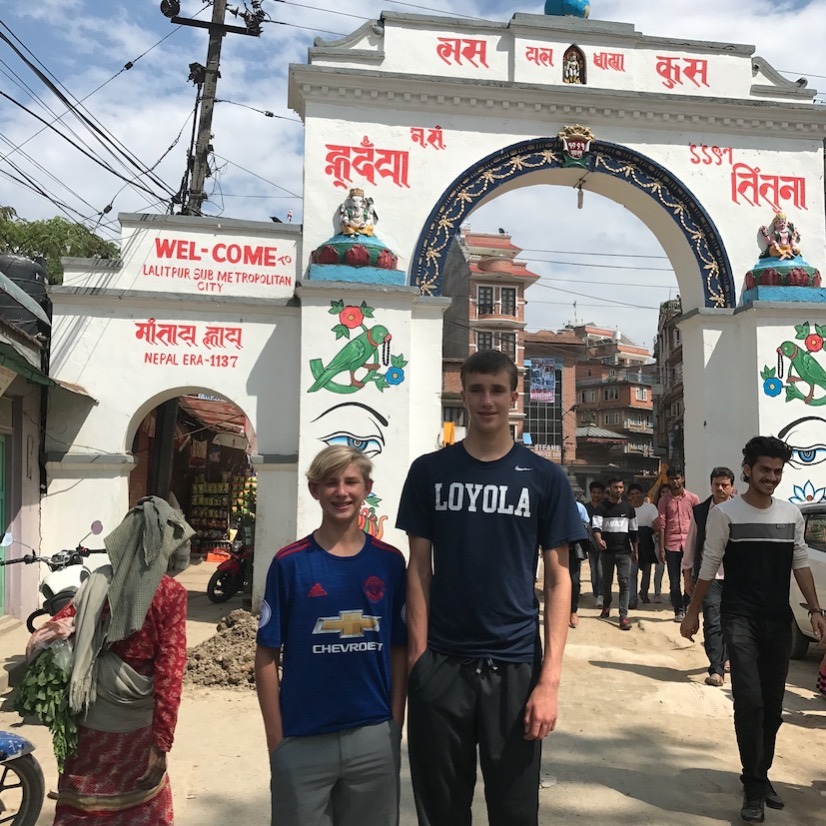 After an amazing breakfast of fresh fruits and curry, we headed to our first stop, Swayambhunath Monkey Temple. This incredible Stupa high in the hills overlooks the whole Kathmandu Valley and is a 5 minute taxi ride from Thamel, where you will be dropped at the bottom of the hill. 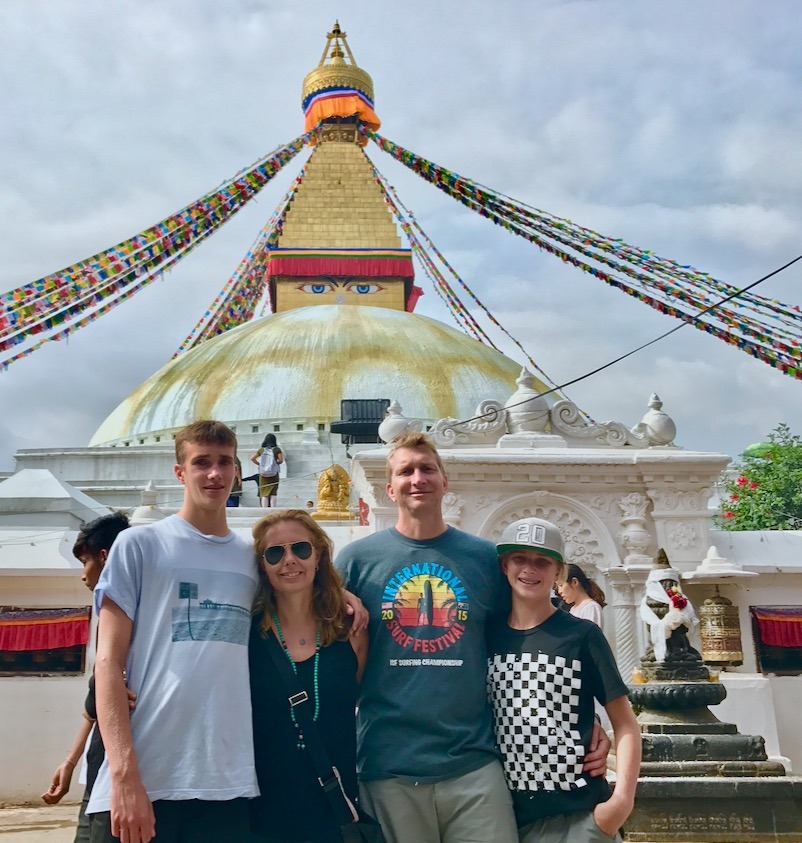 You can probably guess based on the name, that there were literally hundreds of wild monkeys roaming the temple. We were breathless and sweating as we climbed the steep steps to the temple peak, and were rewarded with panoramic views of the valley, peaceful prayer flags, and the mystical ancient Stupa. This was our first introduction to prayer wheels, which are found all over Nepal and Bhutan, and we learned how local devotees create a ritual circumnavigating the Stupa, spinning the prayer wheels set into the base, while praying. Prayer flags decorate most hills in Nepal and are such a beautiful compliment to the already stunning scenery. 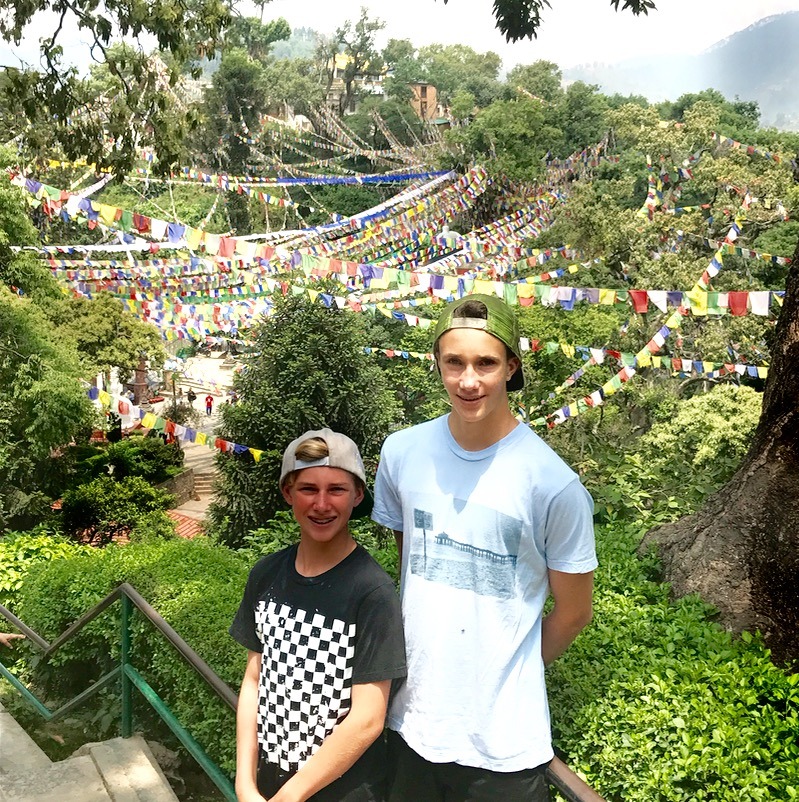 Kathmandu Durbar Square is the largest palace square in Nepal and is a UNESCO World Heritage Site and the epicenter of Kathmandu’s cultural and tourist attractions. Durbar Square, with its old temples, palaces and street vendors, is bustling with life and culture.We did find particularly aggressive vendors here, but we also found some treasures in this area, and it’s a great place to shop and explore.

Perhaps the most interesting temple in this area was our private visit to the Kumari Ghar Temple to see if the Kumari living goddess would make an appearance. Both boys were fascinated to learn more, yet quite skeptical too. The Kumari is a young girl believed to be the incarnation of the Hindu goddess Durga. She is chosen from girls aged three to five in the Buddhist Shakya clan, is worshipped by many, lives an isolated and secretive existence inside the temple and her feet NEVER touch the ground during her tenure!! (for real!) We were told that the Kumari ‘sometimes’ appears’, especially if her handlers are paid well. “Cough cough total scam” said Julian under his breath… I nudged him hard, and sternly whispered for them to keep an open mind. 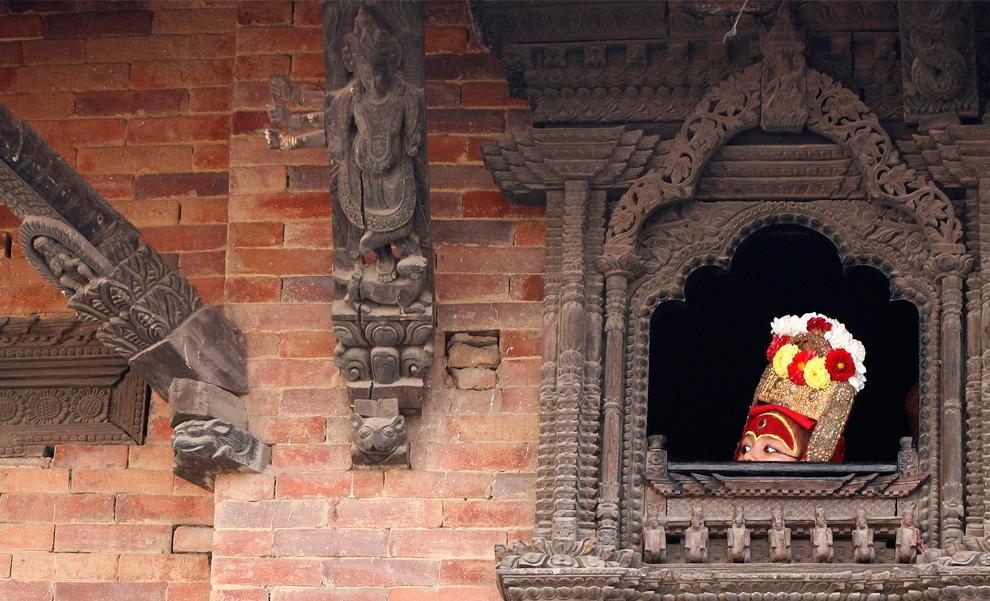 It turns out as we were waiting for the Kumari to appear, AND after we tipped her ‘handlers’, she appeared! I don’t mean to be cynical, and in full disclosure haven’t learned a whole lot about the Kumari, but my first instinct was to agree with Julian’s initial comment. Regardless it was fun, we joked about mom being a goddess, and headed to our next stop.

5. The Garden of Dreams – Kathmandu

The Garden of Dreams is a peaceful oasis, located in the heart of Kathmandu. It’s filled with  neo-classical pavilions, well manicured gardens, expansive lawns and is a lovely place to spend a few hours escaping the madness of the city. The pristine manicured lawns are filled with local wildlife and flowers, and it felt like the Yin to the Yang of the chaos of life outside the walls. Entrance is 200 rupees for foreigners and it’s worth every rupee to escape into this version of heaven. 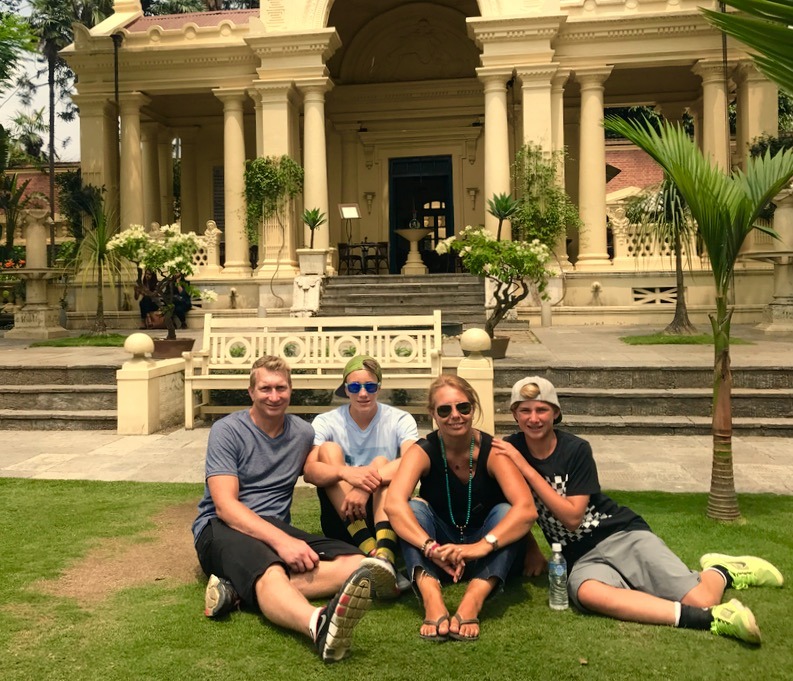 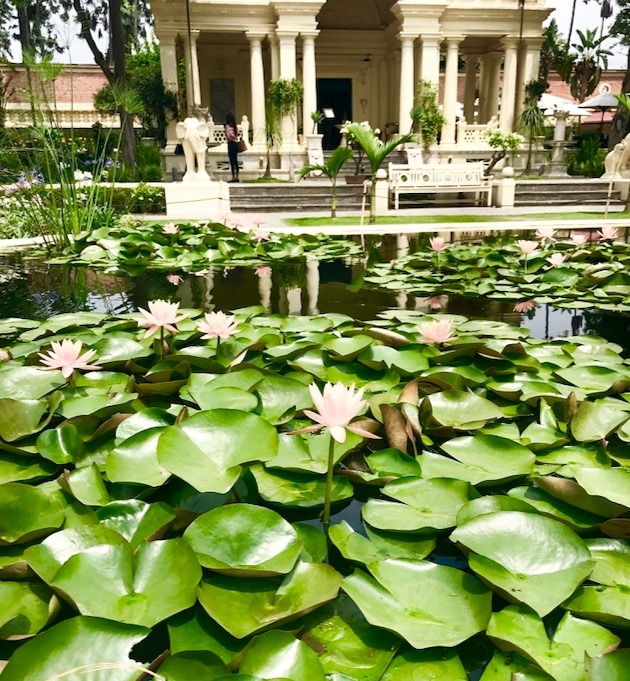 Boudhanath Stupa is the largest stupa in Nepal, and the holiest Tibetan Buddhist temple outside Tibet. It’s the center of Tibetan culture in Kathmandu and you can see and more importantly feel the Buddhist symbolism all around. 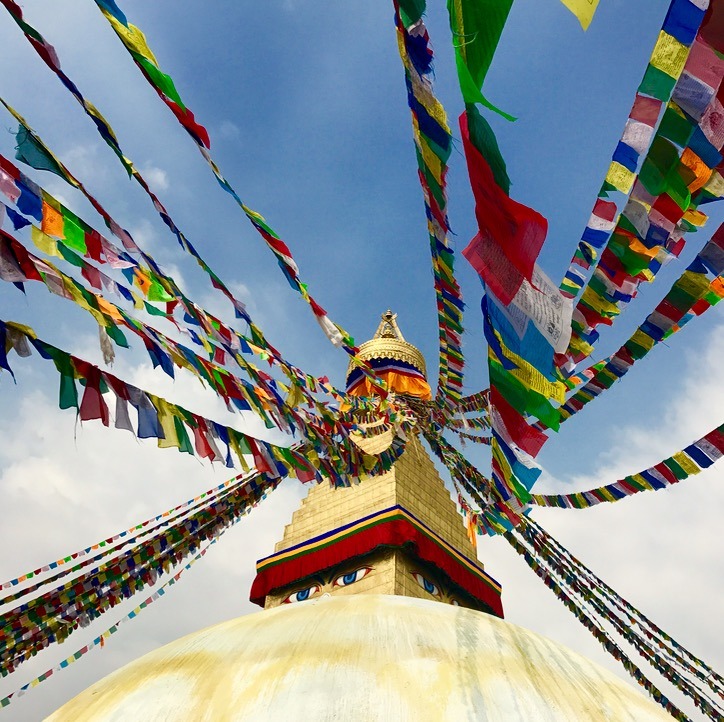 Surrounding Boudhanath Stupa are winding streets and alleys lined with colorful homes, Tibetan Buddhist monasteries, and street vendors. Spending an afternoon here is good for the heart and soul. It’s the perfect place to sit with a cup of local coffee and watch old ladies with prayer beads spin prayer wheels, Buddhist monks chant, and just soak in the culture.

Spending a few days in Kathmandu will give you a feel for the beautiful culture, but more importantly the beautiful people. We embraced the humble and gentle people, the magnificent temples, and we especially loved the food.

Our family travel rule is we must try the local food. We were pleasantly surprised and enjoyed pretty much all of the Asian/Indian influenced food we were served. We all agreed that momo’s (filled dumplings) served steamed or fried, are ‘the bomb’ according to the boys. We ate our way through Kathmandu with Dal, rice, chow mein, momo’s, curry, and plenty of Gorkha and Everest local beer to wash it down.

Kathmandu is good for your soul, and the locals need your tourism dollars more than ever.  If Kathmandu is on your bucket list I hope this inspires you to begin to plan your next adventure. If you are looking for a reputable day tour company in Kathmandu, I’d recommend this Private full day tour.

What are YOUR favorite things to see in Kathmandu?

How to Visit Chitwan National Park from Kathmandu

Nepal is a beautiful country filled with incredible people, a rich culture and amazing history…

5 Things to see in Pokhara, Nepal

Nepal is filled with stunning scenery, a rich culture and amazing history. We explored Kathmandu…