How to Visit Chitwan National Park from Kathmandu 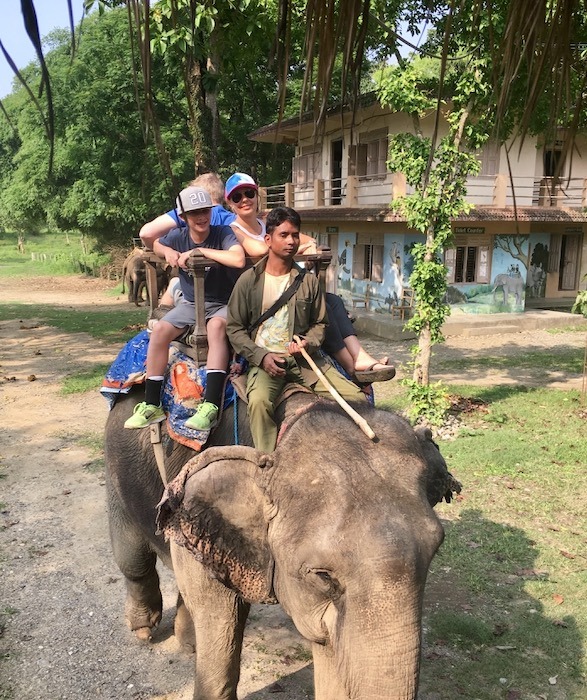 Nepal is a beautiful country filled with incredible people, a rich culture and amazing history. There’s only one international airport in the whole of Nepal, so Kathmandu is the first destination for international travelers and is considered the gateway to the Nepalese Himalayas and tourism in Nepal. We explored Kathmandu, Chitwan National Park and Pokara before flying to Paro, Bhutan. 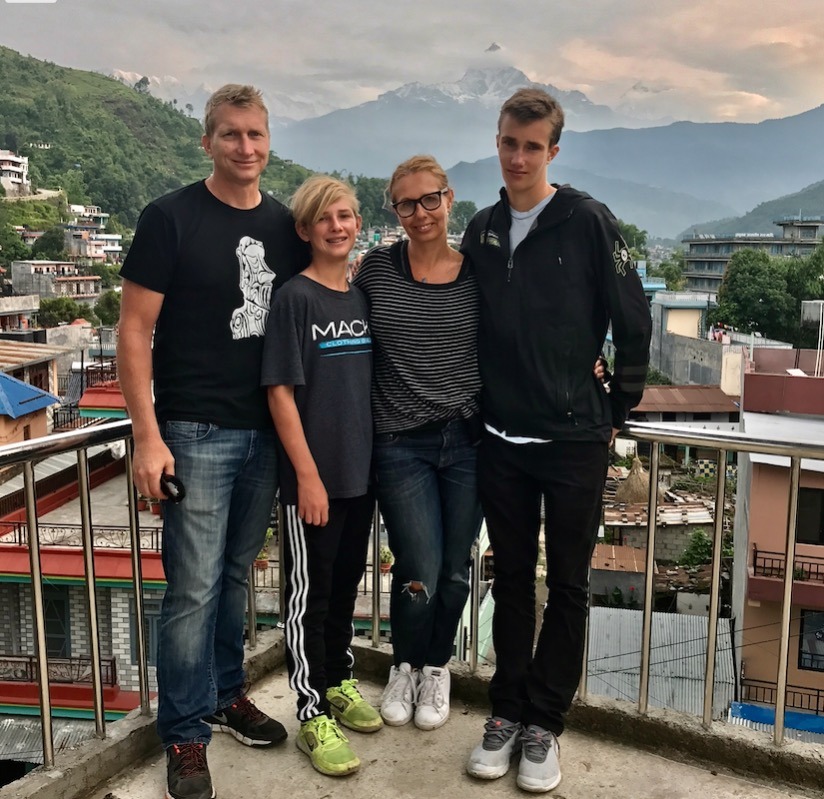 Chitwan National Park is one of Nepal’s eight national parks, located in south-central Nepal and is known for its biodiversity. The park was granted World Heritage Status in 1984 and the dense forests and grassy plains are home to one-horned rhinos, crocodiles and Bengal tigers. Chitwan is 150 kilometers (93 miles) from the capital city Kathmandu, and you can get there by local bus, a driver or tour, or fly into the small local airport. 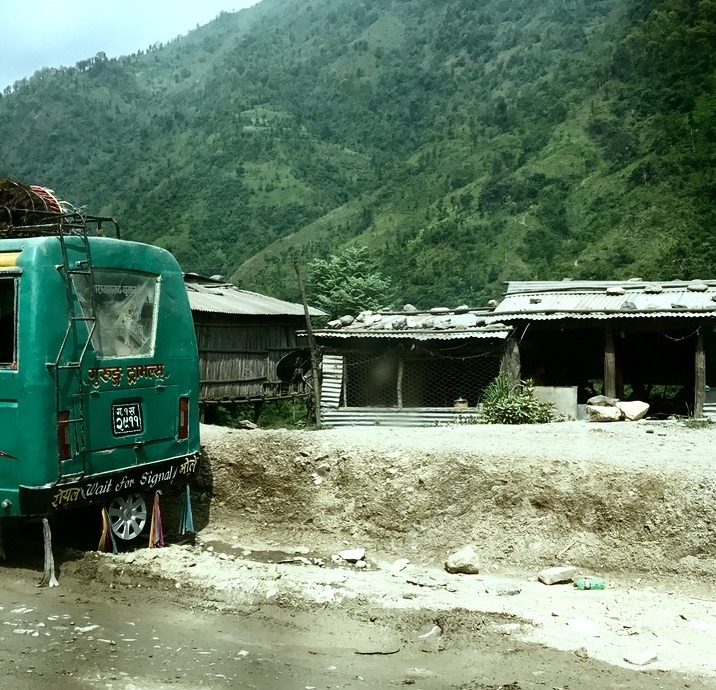 We decided to hire a driver to take us, and when we were told we needed to leave at 5am to arrive at ‘the pass’ in time as the road closes every day, I realized this might not be an easy drive. It turns out that ‘road’ is a very subjective term. We spent the next 6 hours driving a muddy, pothole filled area, trying to avoid construction trucks and falling off the edge of a cliff! The ‘road’ is under heavy construction… partially due to the earthquake and partially due to it being an underdeveloped country.  This was a white knuckle ride the whole way. 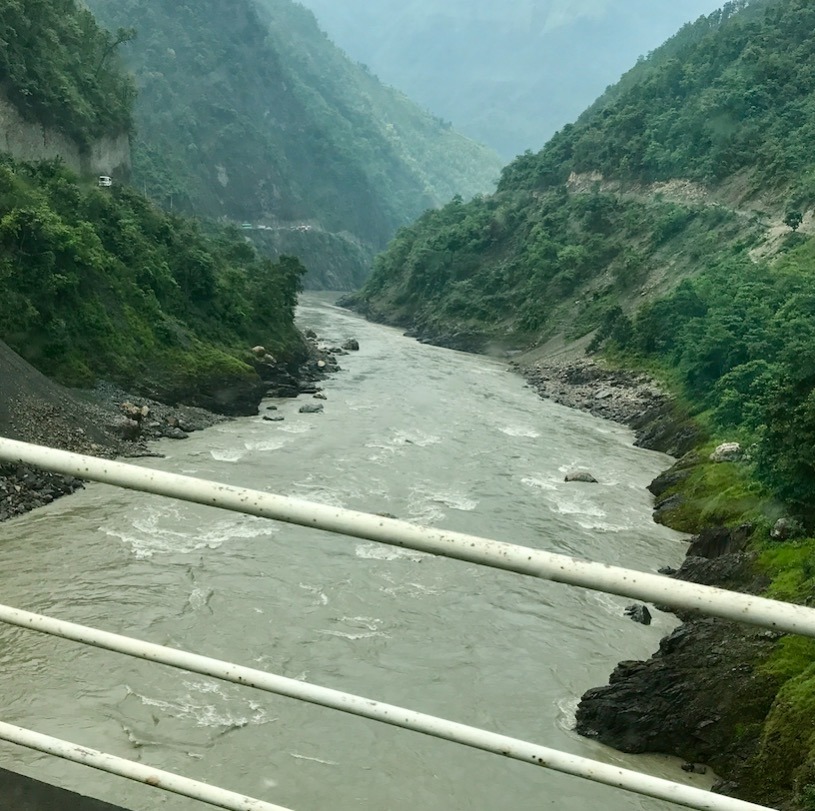 Fortunately our driver, Quesub, was ‘a boss’ according to the boys. He swerved trucks at the last second, evaded the deepest potholes to avoid popping a tire, and clung to the ‘road’ so we didn’t skid off the sheer 500 ft drop into the river below. When we finally arrived at the Green Park resort, we needed an hour to decompress and recover (and perhaps drink a cold beer or three!) The humidity, interesting bugs, soothing animal sounds, and the lack of people, were a far cry from the hustle and bustle of Kathmandu. It felt peaceful and serene. After resting, we visited a local village using the only mode of public transportation… the ox-cart. 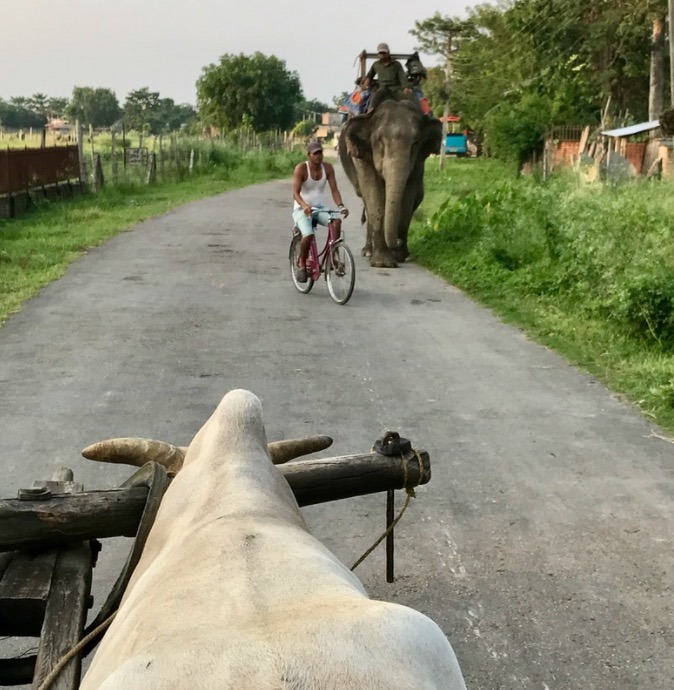 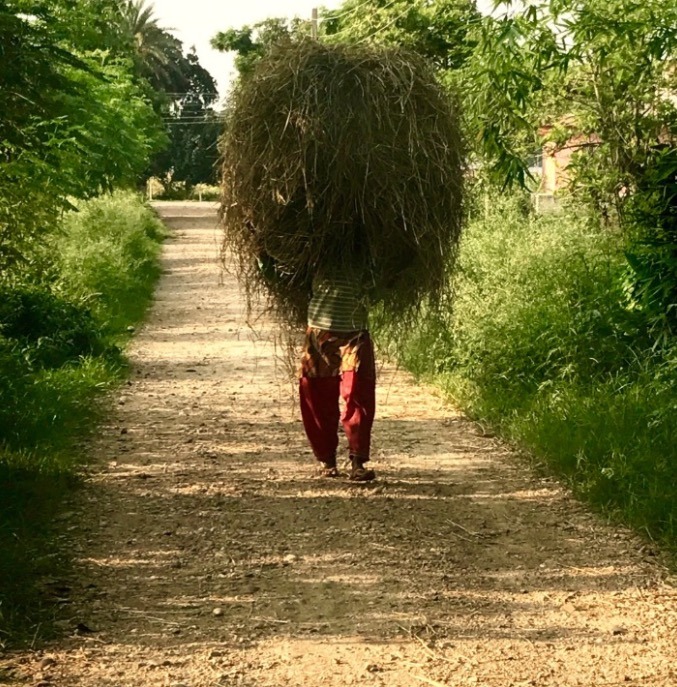 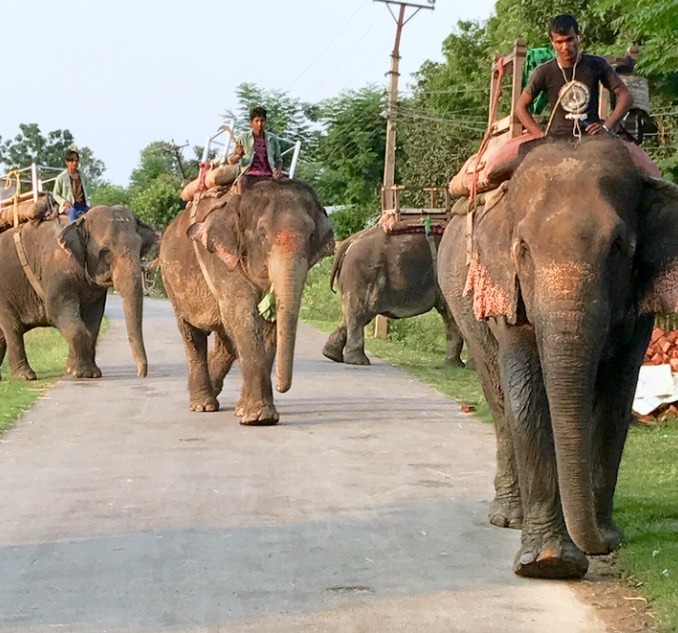 Of course the ox needed a big ole pee, much to the boys’ delight  (really there’s nothing funnier to boys than animals relieving themselves!) and we were on our way. We met villagers in their huts made from ox dung, visited the local school, and saw women shucking harvested corn and laying it out to dry on the side of the road. The peaceful way of life was inspiring. 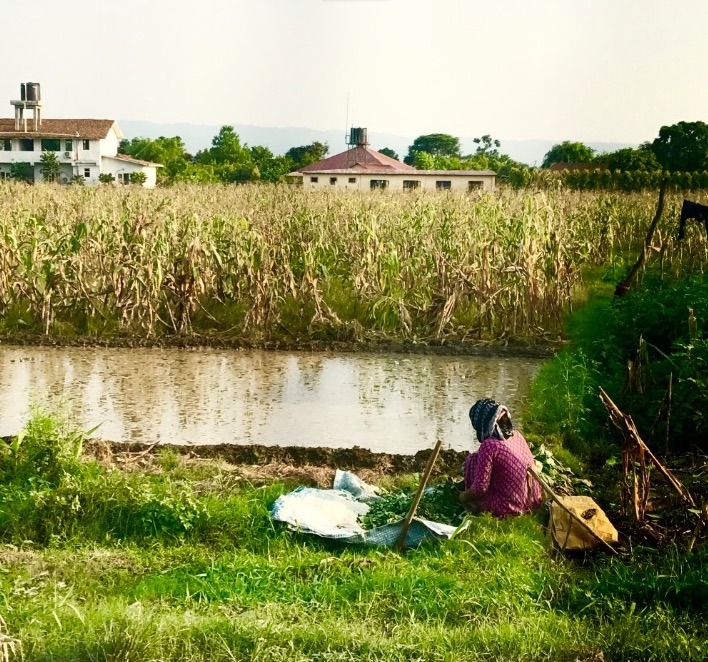 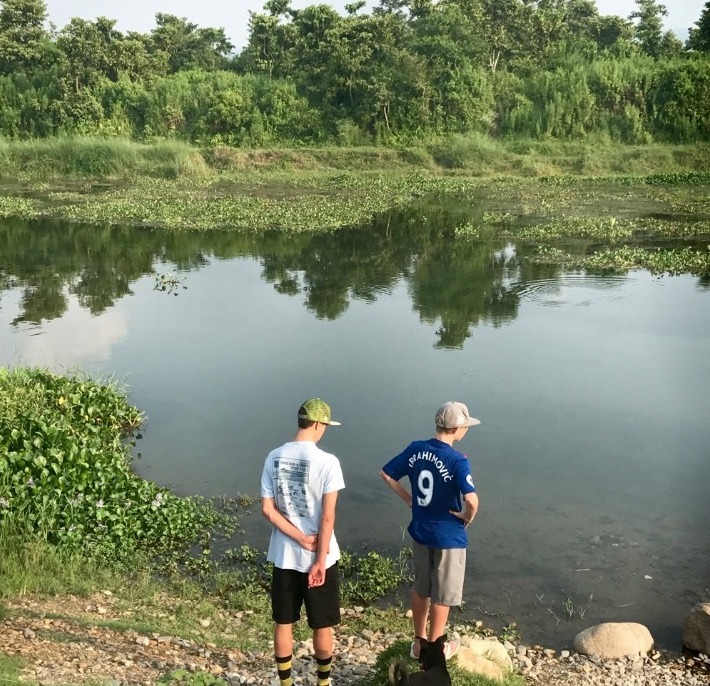 We headed to the river (avoiding the edge because of crocs) and sampled the local cuisine served to us. Sebastian wanted a ‘mocktail’ and in a momentary lapse of judgment, I allowed him to get a virgin pina-coloda. BIG MISTAKE! We woke the next morning at 6am for our jungle safari to find Julian already on his deck, wearing his robe and free hotel slippers… “oh hey mom, I’m just chillin and I made coffee for everyone, do you want one?” That kid just cracks me up! 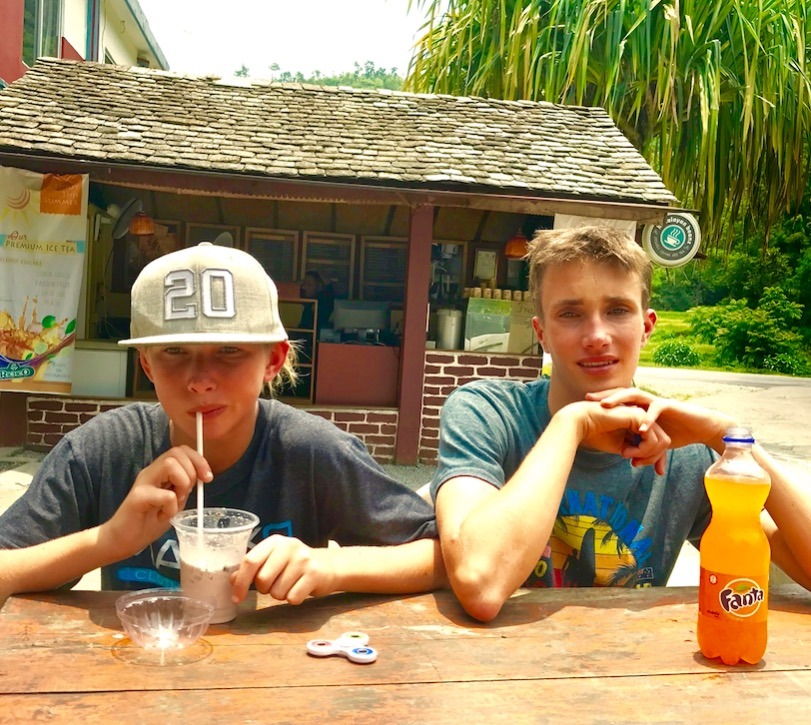 However, we had a big problem with Sebastian… fever, liquids flowing from every orifice and he was feeling terrible. Crap (pardon the pun), I realized the pina-colada might not have been the best decision. We tried to revive him, but it was apparent he needed to be 2ft from a bathroom for the next 24 hours. The resort assured us they’d keep an eye on him and bring liquids, so the three of us headed to our jungle safari.

We rode elephants, spotted unique birds, and canoed up the river. It was hot, humid, however the animal sightings were pretty slim to be honest. A far cry from our African safari where the animals were practically sniffing our ankles. Nonetheless we connected with mother nature and embraced our surroundings. We arrived back at the resort hot and sticky, and found positive news; Sebastian was feeling better! We fed him fresh orange juice and soup, his brother shared everything he missed (much to his delight), and we headed to bed… after a cold beer of course! 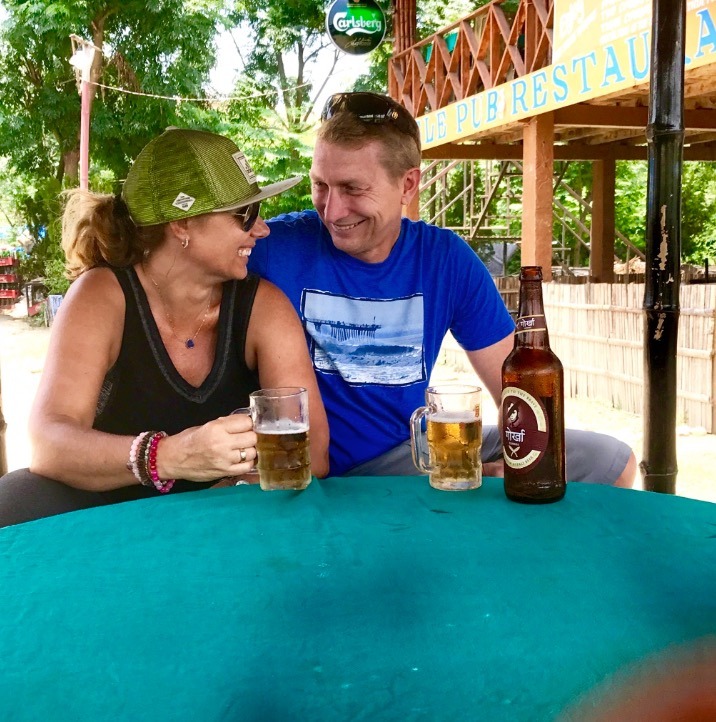 Three days is really all you need to enjoy the nature, beauty and culture of Chitwan National Park and there are many tour operators who offer this service from Kathmandu. It’s important to find a reputable tour company and I recommend this 3- Day Chitwan Safari Tour from Kathmandu as they will take care of every detail.

Have you visited Chitwan National Park in Nepal?

5 Things to see in Pokhara, Nepal

Nepal is filled with stunning scenery, a rich culture and amazing history. We explored Kathmandu…